Cesar's Guide to the E1 Trails in Sweden: Björsjö to Smedjebacken


*Update 24/11/2022: I did not hear anything about this section for a long time, but recently I was made aware that there seem to be improvements to this section. I was informed by a reader that there are now other websites with more current information on Sméleden, for example here.

Based on this information, I will try and do another section hike of this area, from Björsjö to Leksand I think would be a good plan. If/when I do I will add some updates to this trail guide. Until then, I'll keep the old guide as it is below.

The official Swedish E1 information website lists this bit of trail as part of Sméleden trail, and it is a short yet tricky hike at roughly 15km.  There is a road that runs fairly perpendicular to where the trail is supposed to be.  I would recommend skipping this bit of E1 for inexperienced backpackers and/or section hikers that are under time constraints.  One easy way to do that is to follow the small highway that connects Björsjö to Smedjebacken.  More on this later.

First let's start with maps.  I strongly suggest that anyone traveling the E1 here to buy a good map of this neck of the woods, such as the Lantmäteriet Terrängkartan 628 for the Ludvika area (Google it and buy it from your book/map shop of choice).  For a basic idea of the area this guide covers, here is a Google Maps page that shows you the route from the village of Björsjö to the small town of Smedjebacken if one were to strictly follow the asphalt road only.

I was not able to find any maps of this trail online, though did find it mentioned on Smedjebacken's official website (in Swedish).  However, after attempting to hike this trail, it strikes me as though whoever wrote the general information on this site has not actually gone out and hiked the trail (at least recently).

Continuing southbound on the E1, you follow part of the Malingsbo-Klotenrundan looping trail, and you can read my guide for that section here.  Hiking northbound you continue on what is supposed to be Sméleden north towards/through Gyllbergen nature reserve, where the E1 changes trails to the Gagnefs Pasture Paths, and ends up in the small town of Mockfjärd.  You can read my report on this next northbound section here.

If you have not read the introduction to this trail guide yet, you can do so here, and there is also a list of links to other completed reports of the Swedish E1 trails.  Please keep in mind this is still a work in progress.

Now on to the guide! 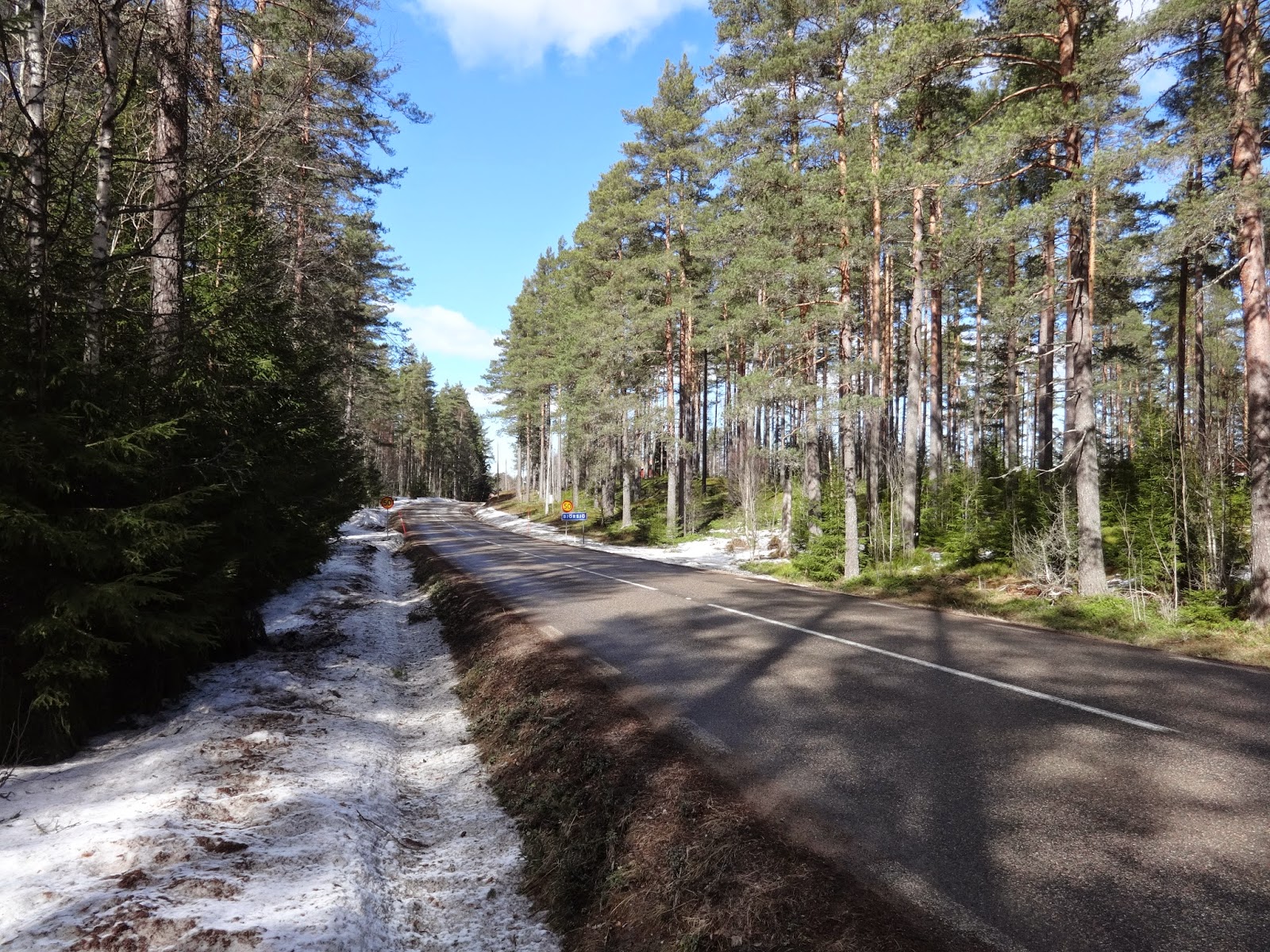 Switching trails on the outskirts of Björsjö it became clear right away that this next section of trail was not as maintained as the last.  There where a few faint, old, weathered trail markers, but I still had to stop and search for the bridge that would take me over the river to the shelter marked on my map.  The bridge is past the small training grounds just past the road, and once I found it I again saw a few faint old markings--but past the bridge they disappeared entirely.  At least, I could not find any, so I just went to the somewhat dilapidated trail shelter for some lunch. 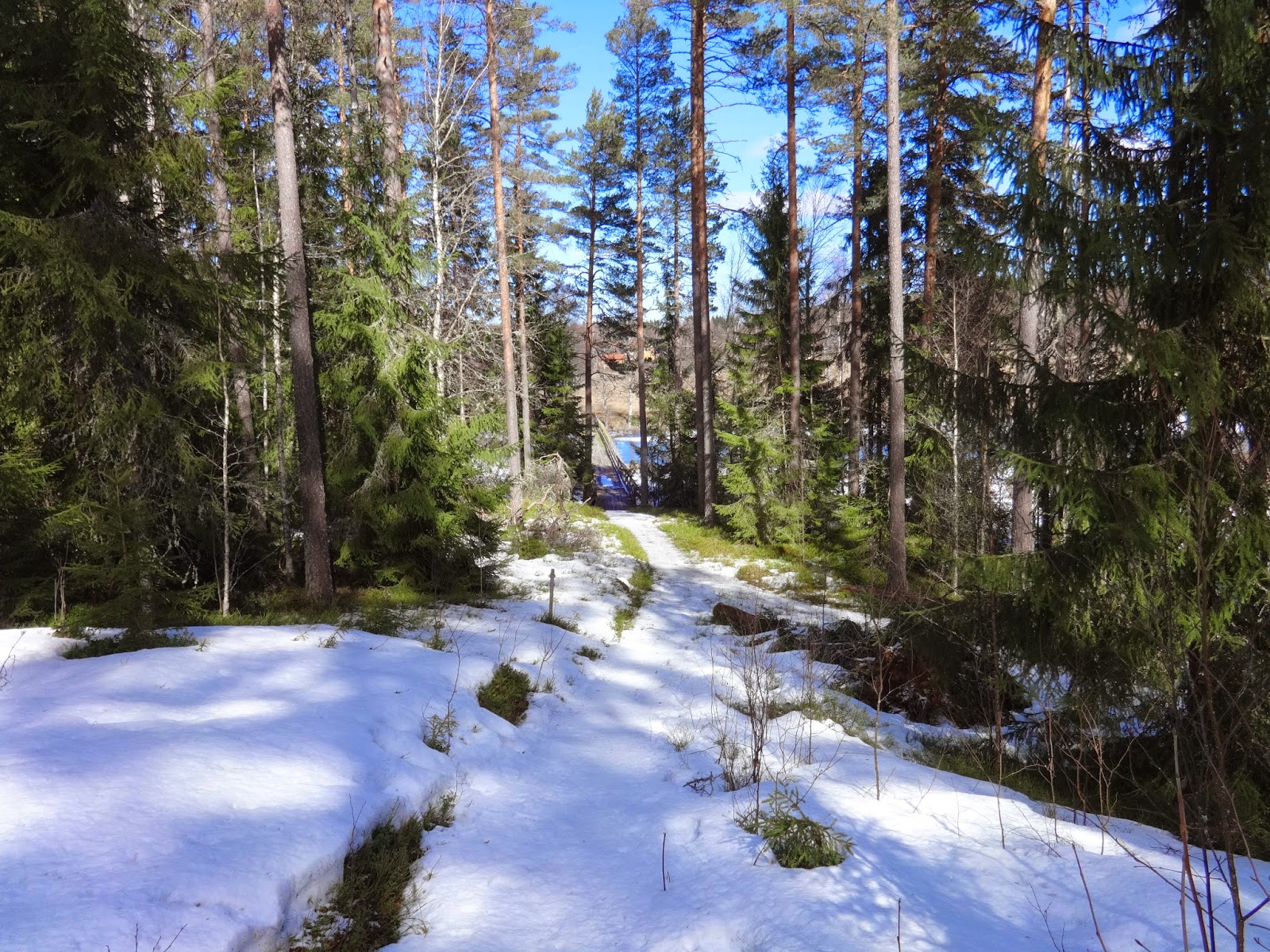 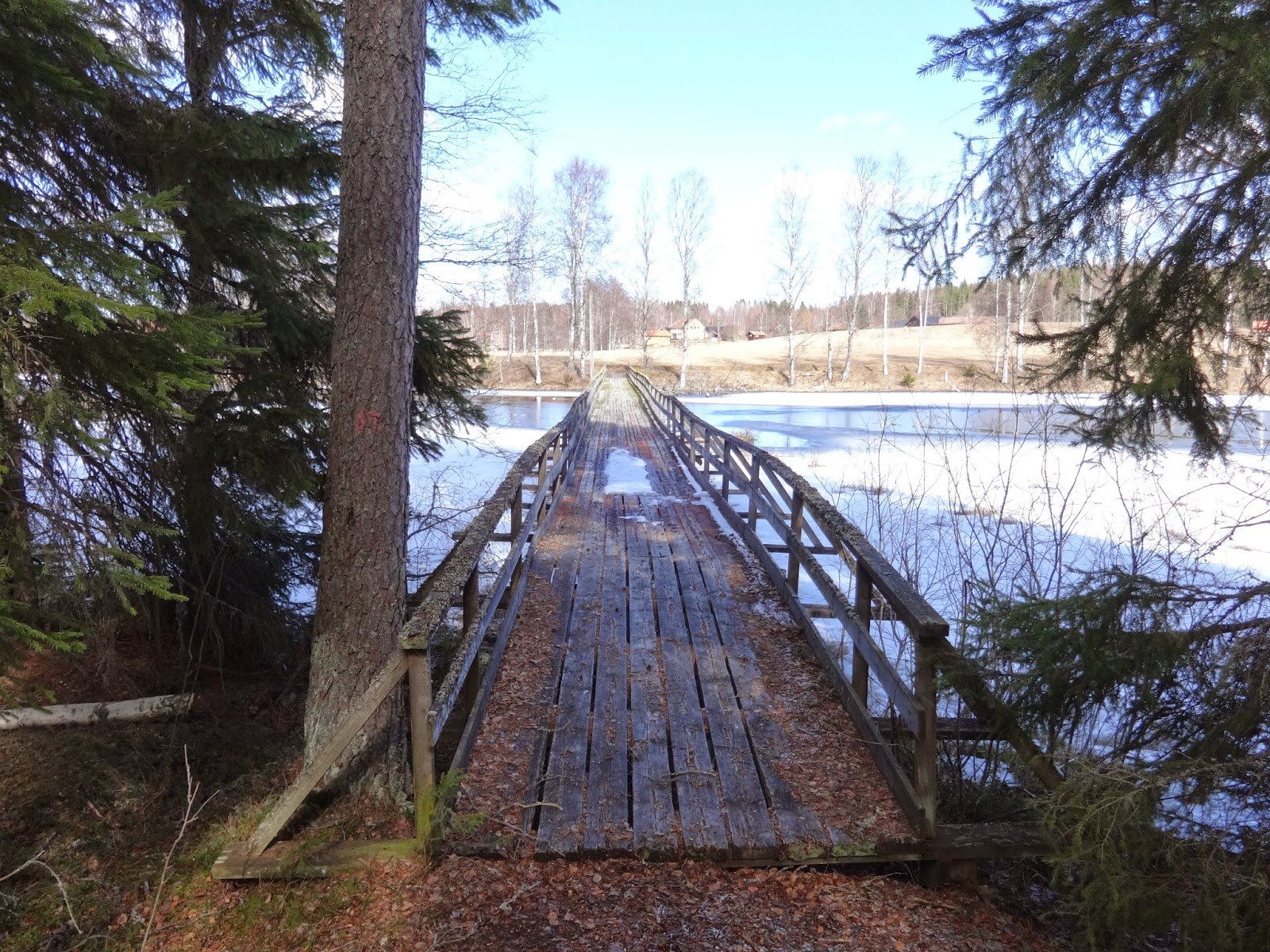 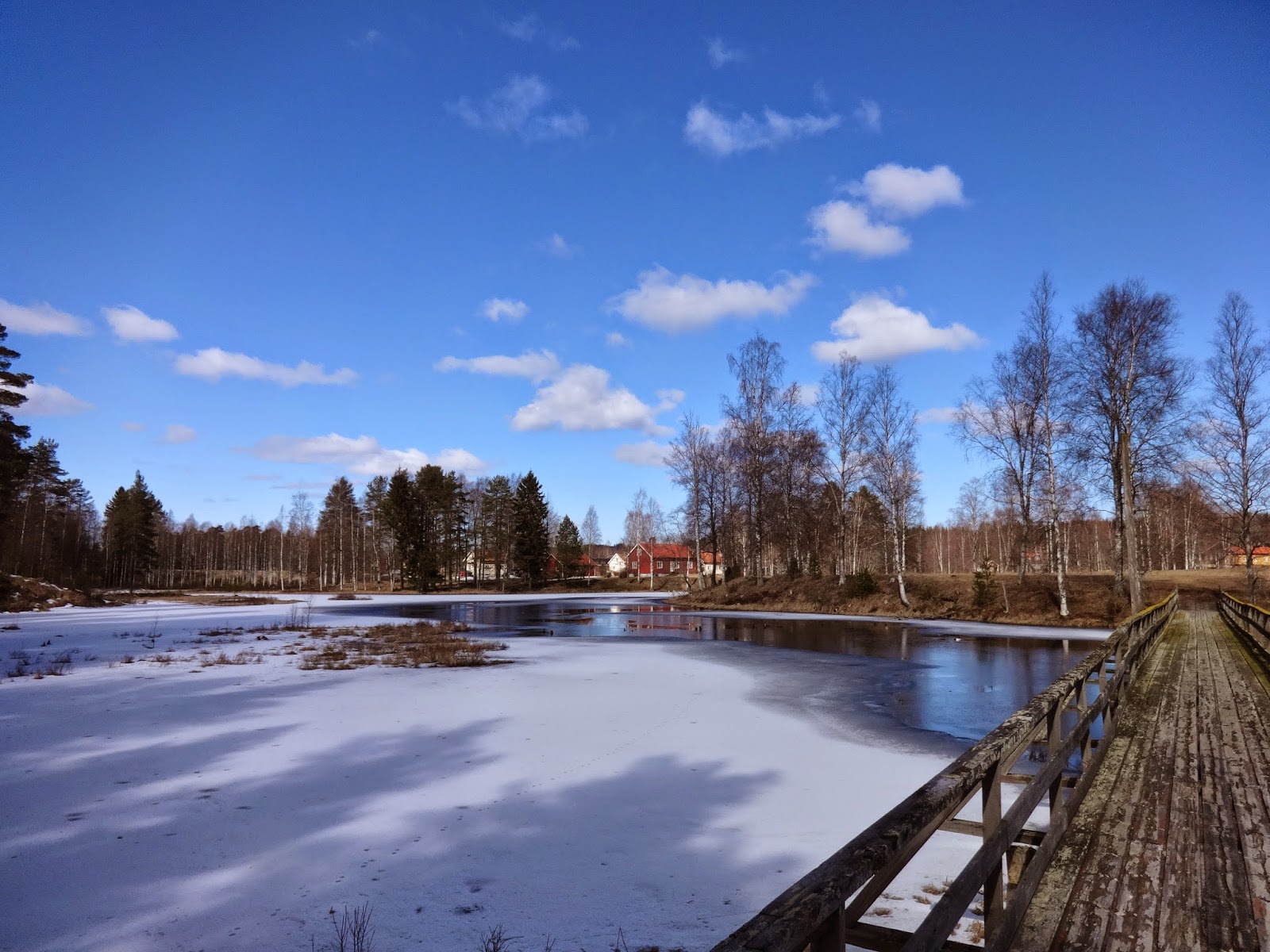 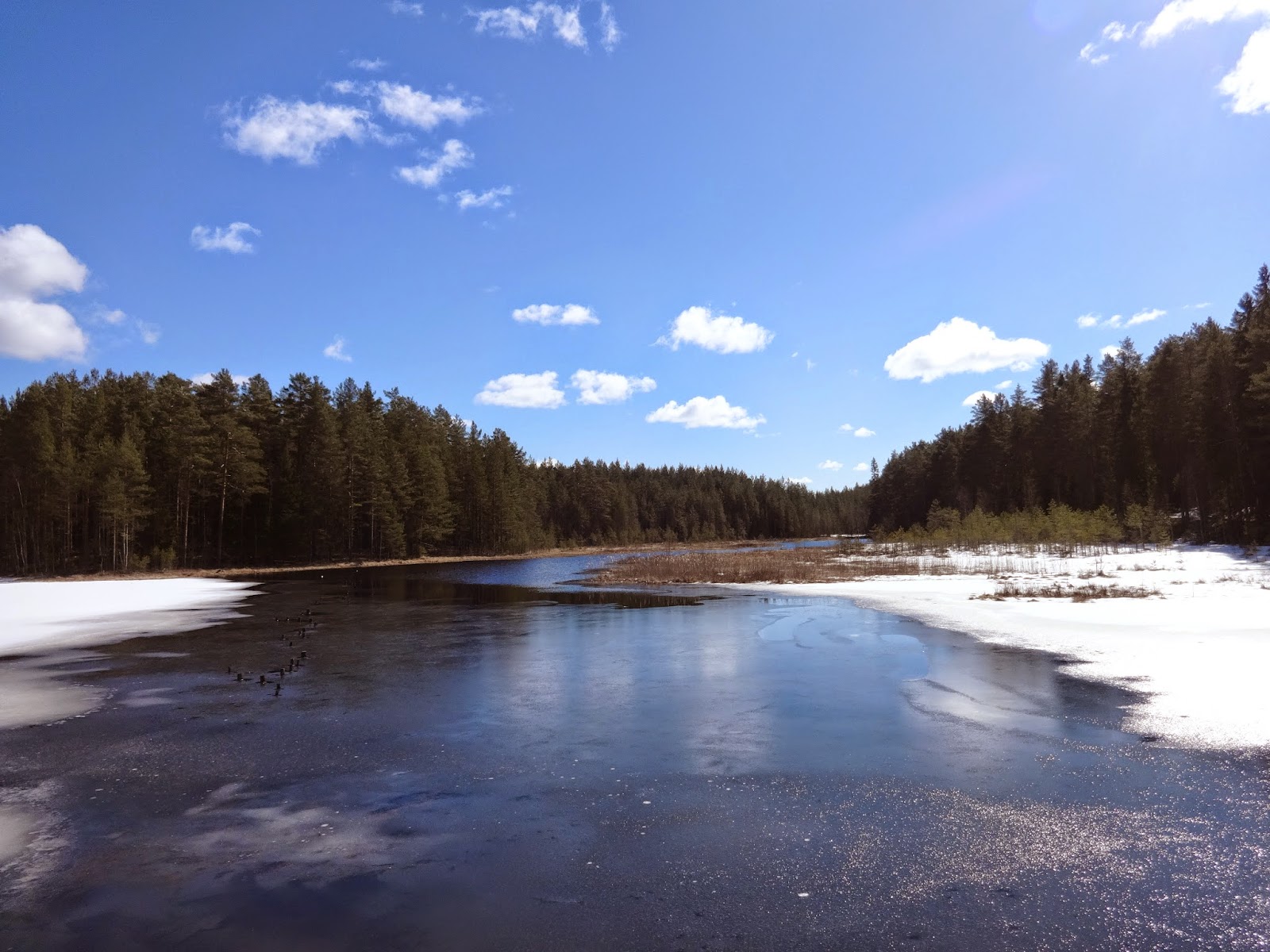 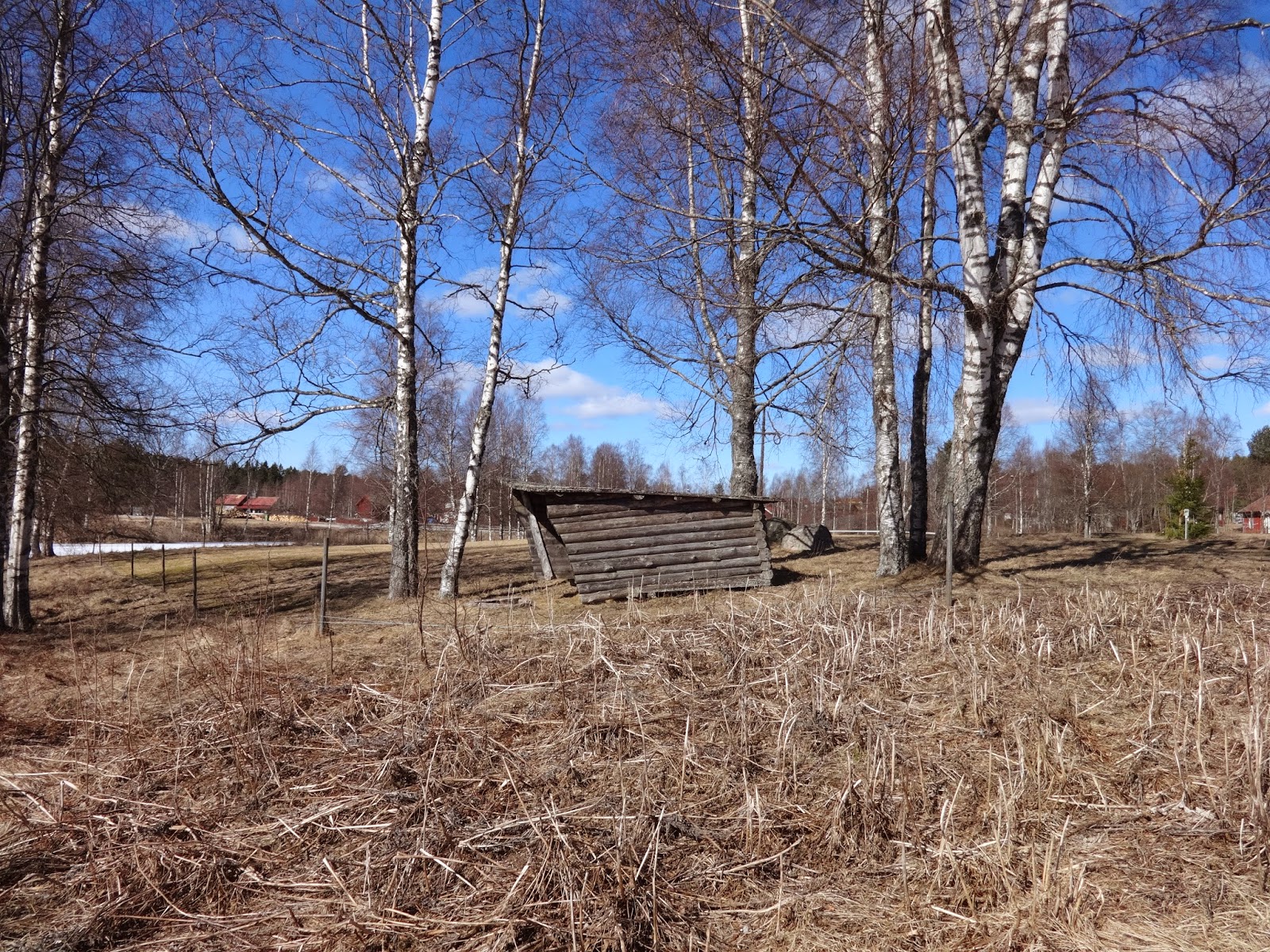 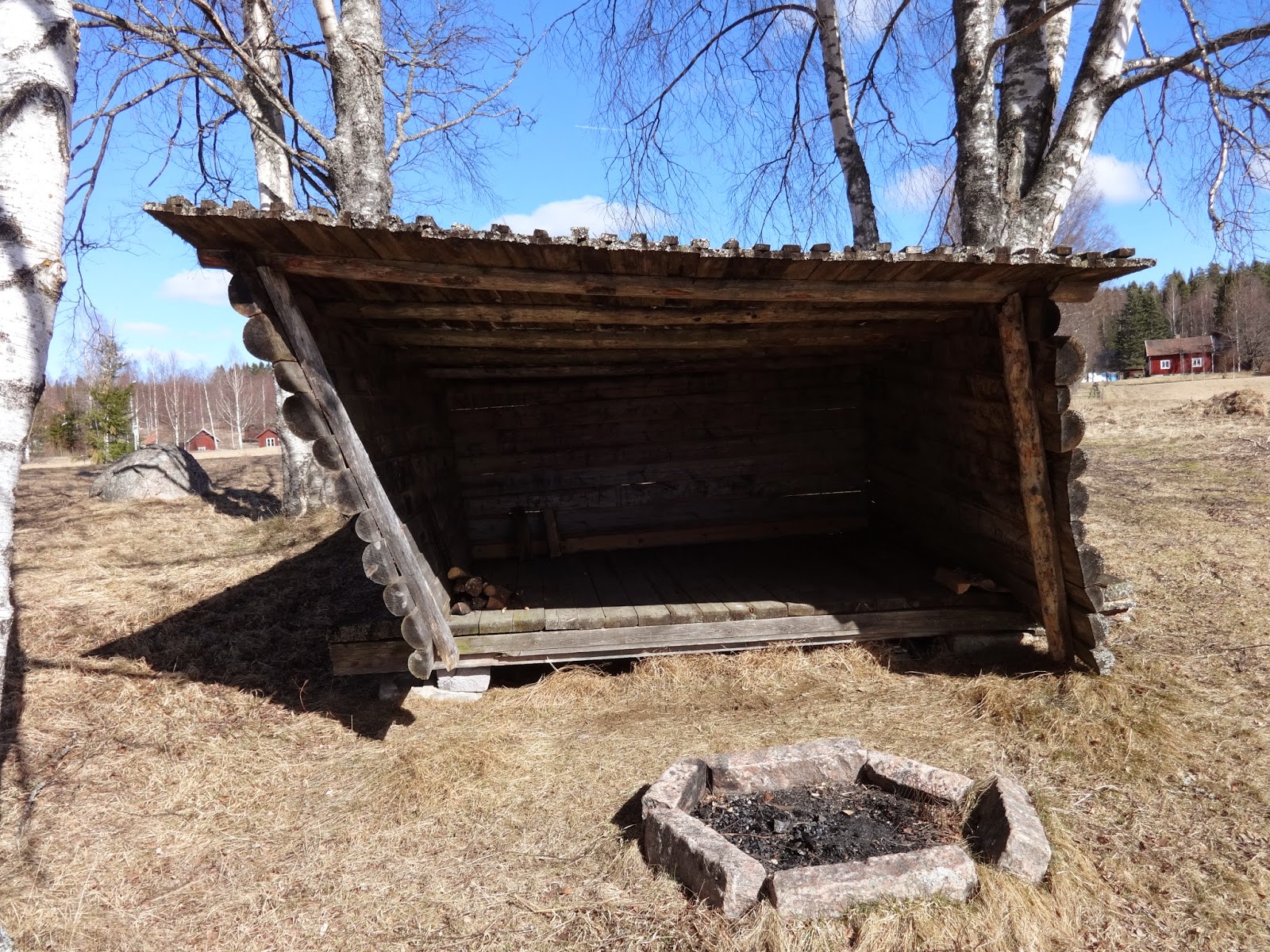 After lunch I resumed my search for trail markers, and found none.  Frustrated, and not wanting to waste much time--I'm a section hiker with a train to catch back home, after all--I studied the map for an alternate route.  I saw that if I followed the road north, that the trail would soon intersect and cross over the road and back into the woods.  There are times that in towns and cities that trail markers get neglected or even vandalized/removed by locals (i.e. bored teenagers), so I though that I could just pick up the trail later on and resume my hike as usual.  I mean the nice map I bought (see: above) clearly shows that there is a marked trail that goes up to Smedjebacken, anyhow.  So on I marched through town, down the road, and to the intersection about 1.5km past lake Mörksjärnen. 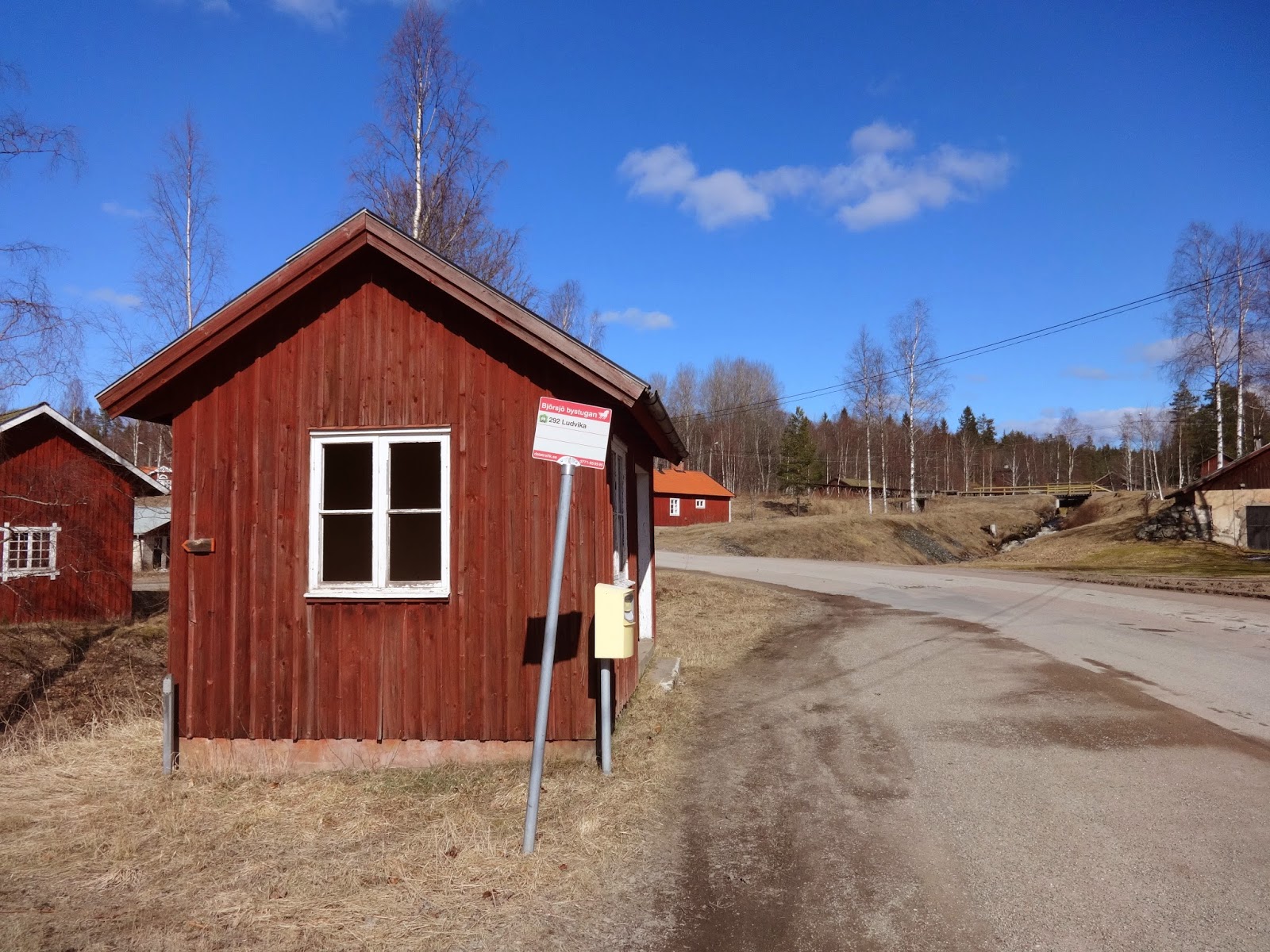 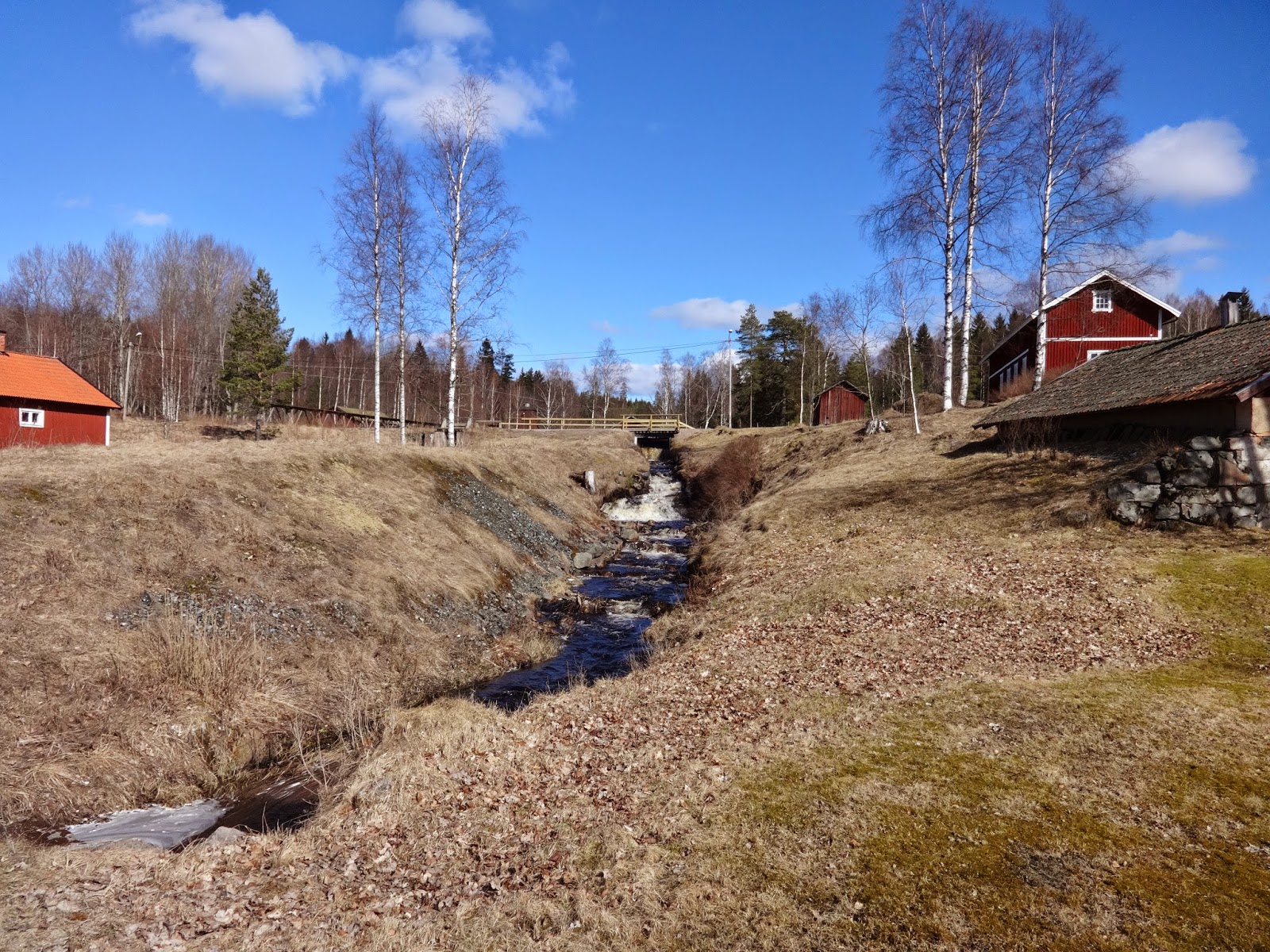 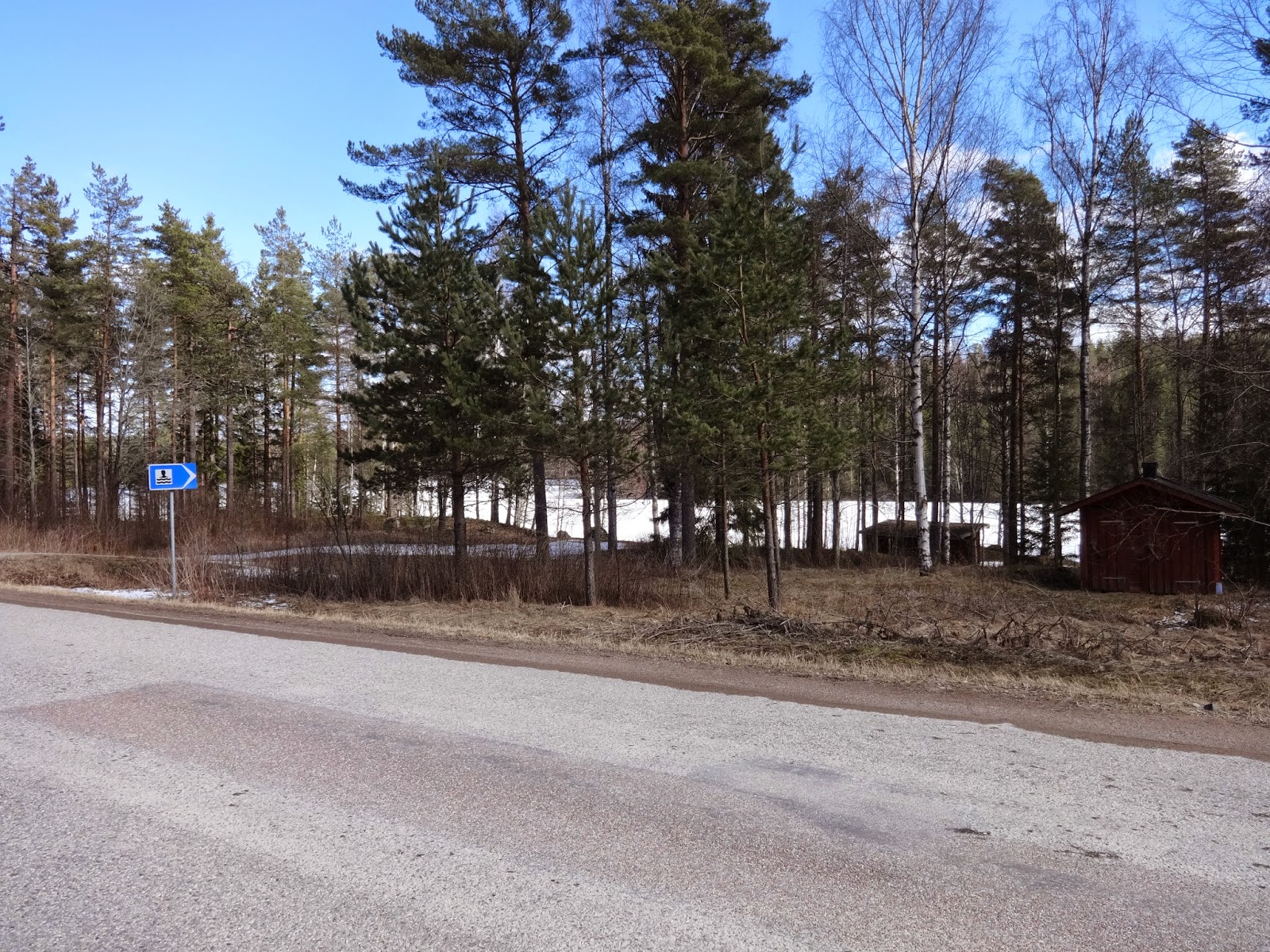 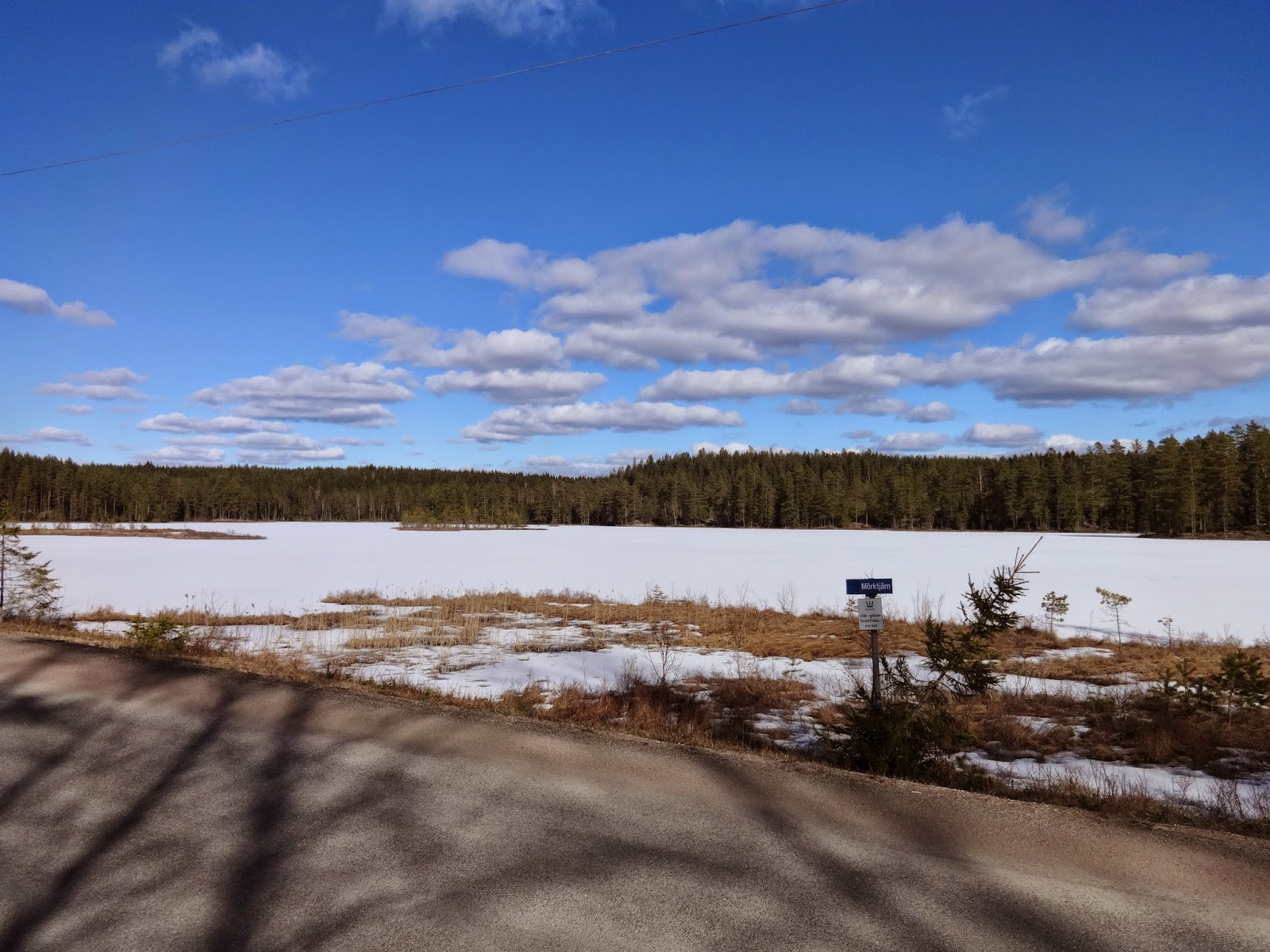 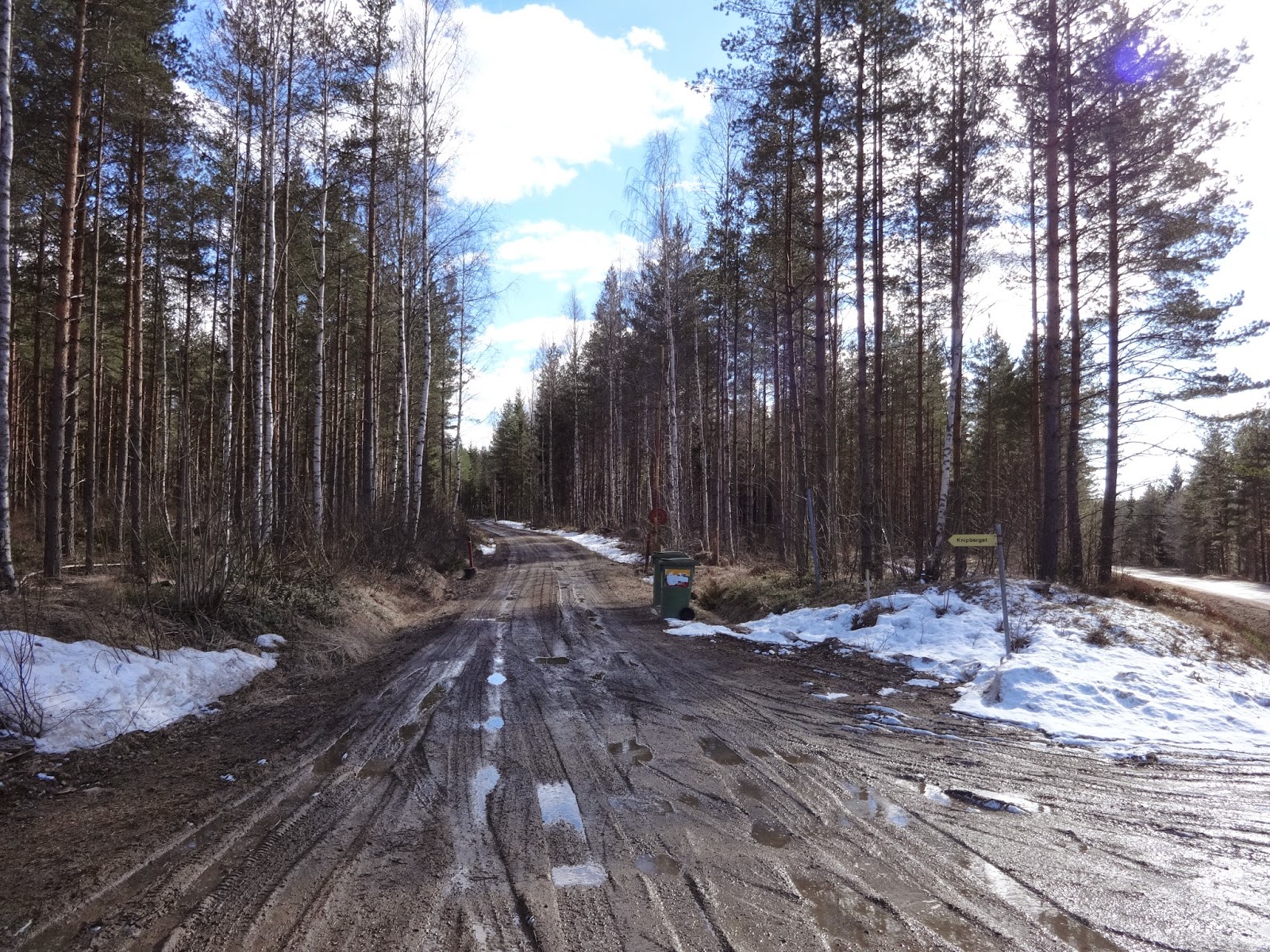 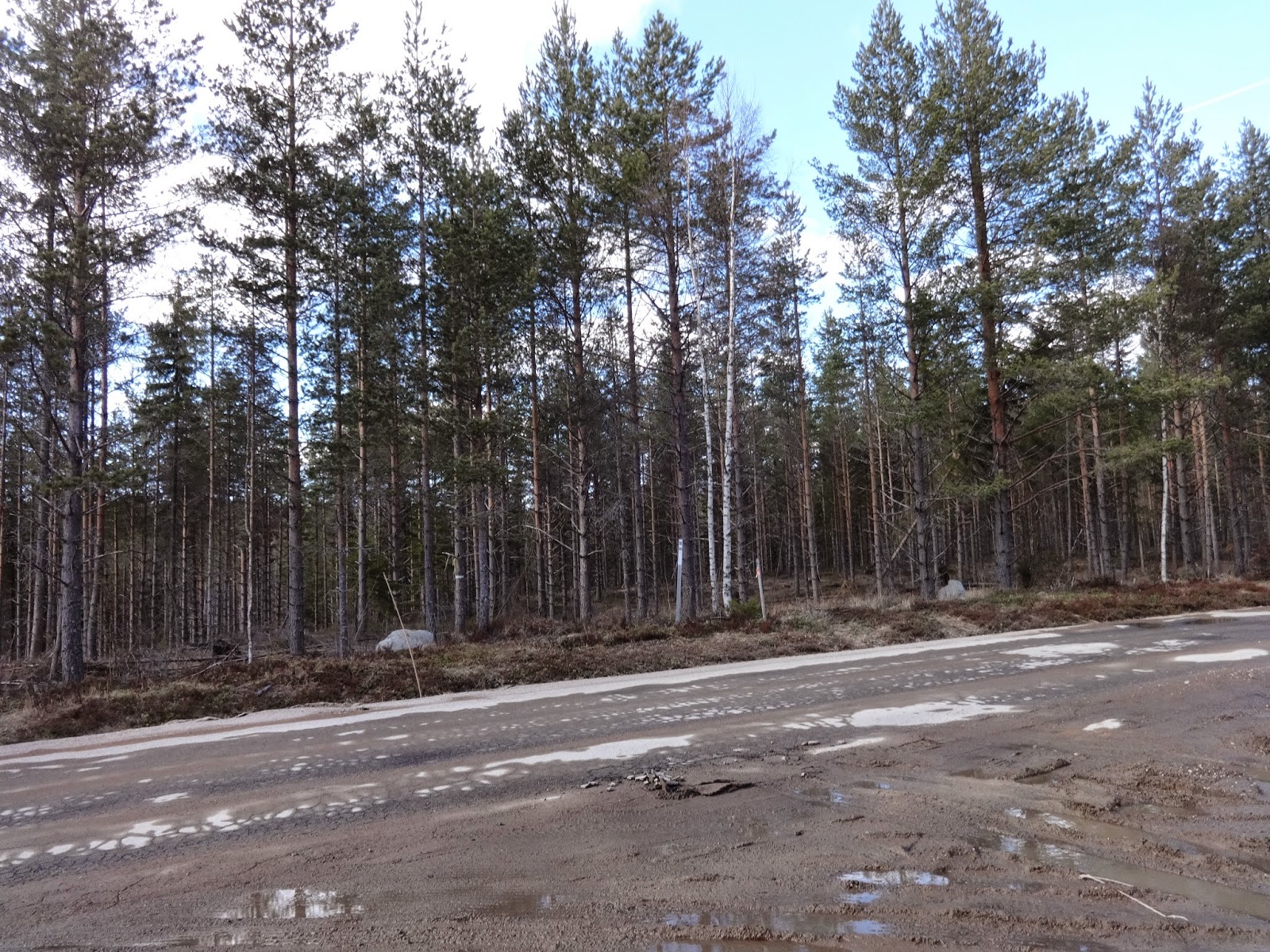 Here's the thing.  I actually like bushwhacking.  If you've followed my blog, you would have seen pictures of thick woods from some of my off-trail trips.  I often take interesting explorations and/or shortcuts on marked trails by bushwhacking.  However as I mentioned in my guide before this one, bushwhacking takes more time, energy, and should be done with caution.  There was no indication prior to my trip that I am aware of that would have suggested that I would need to bushwhack and/or follow a few scant, old, faded trail markers on what is pretty much an abandoned trail.  Here, see for yourself what the conditions were like on the trail past this intersection and hiking through roughly 1km of woods: 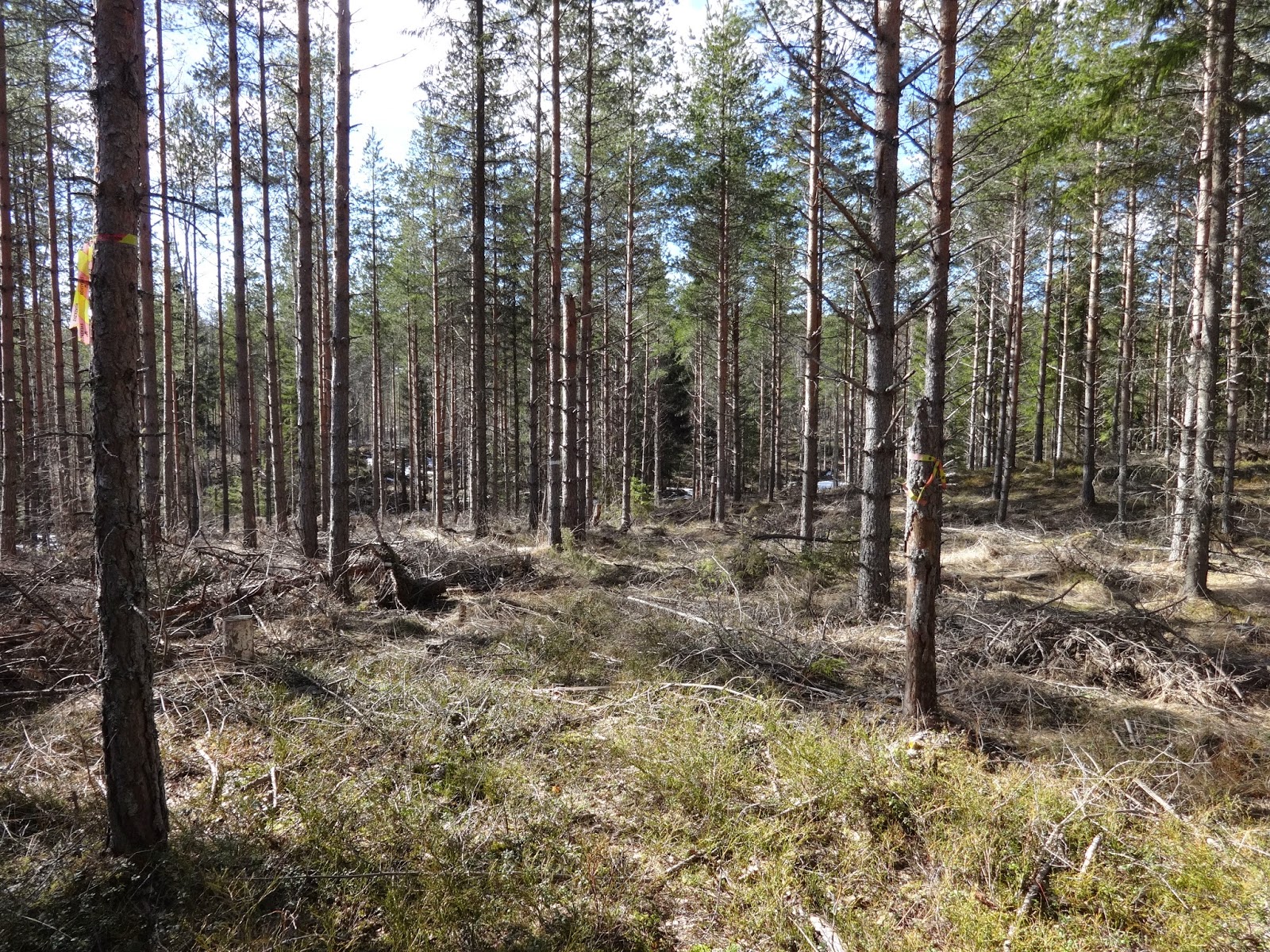 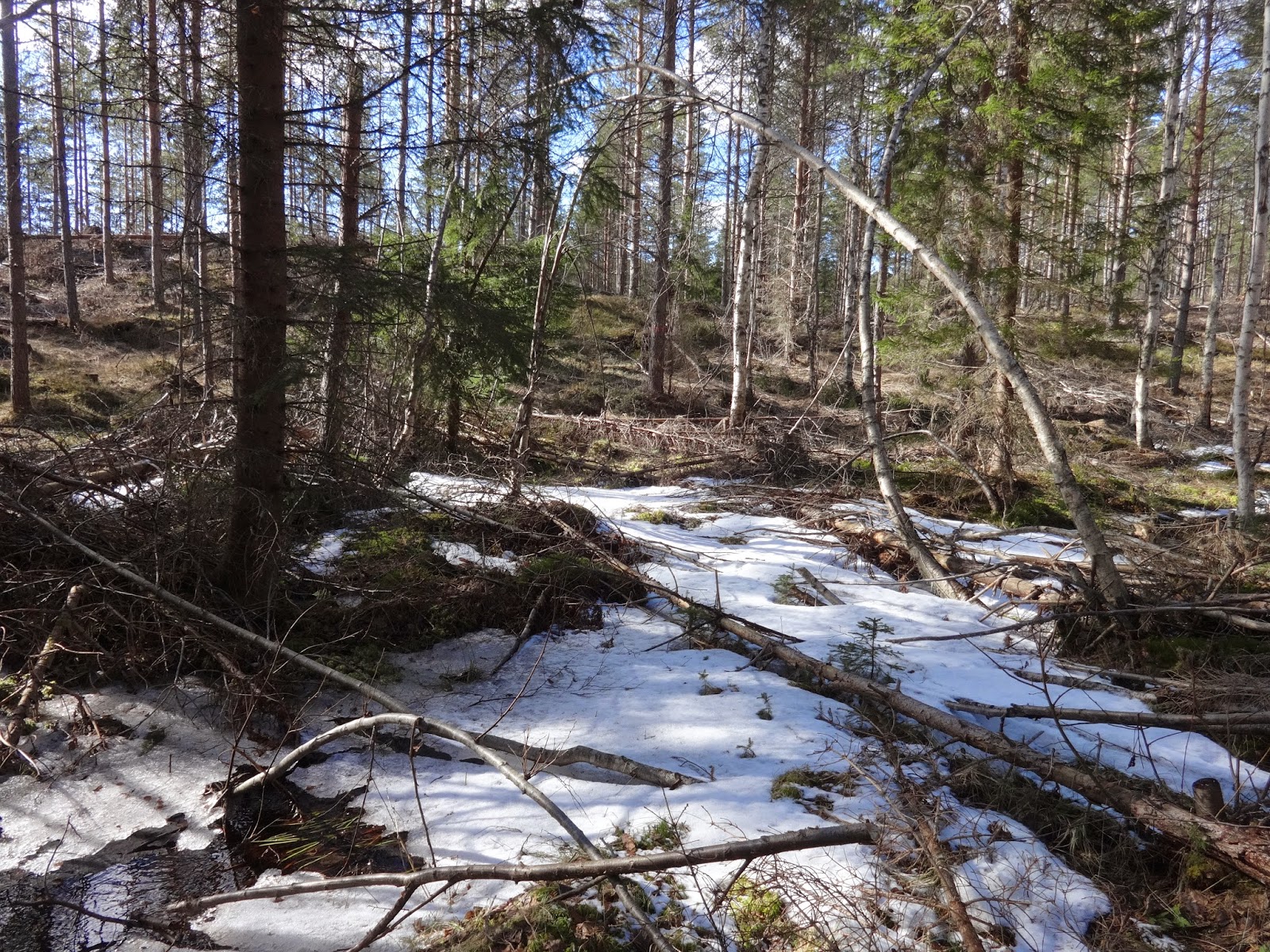 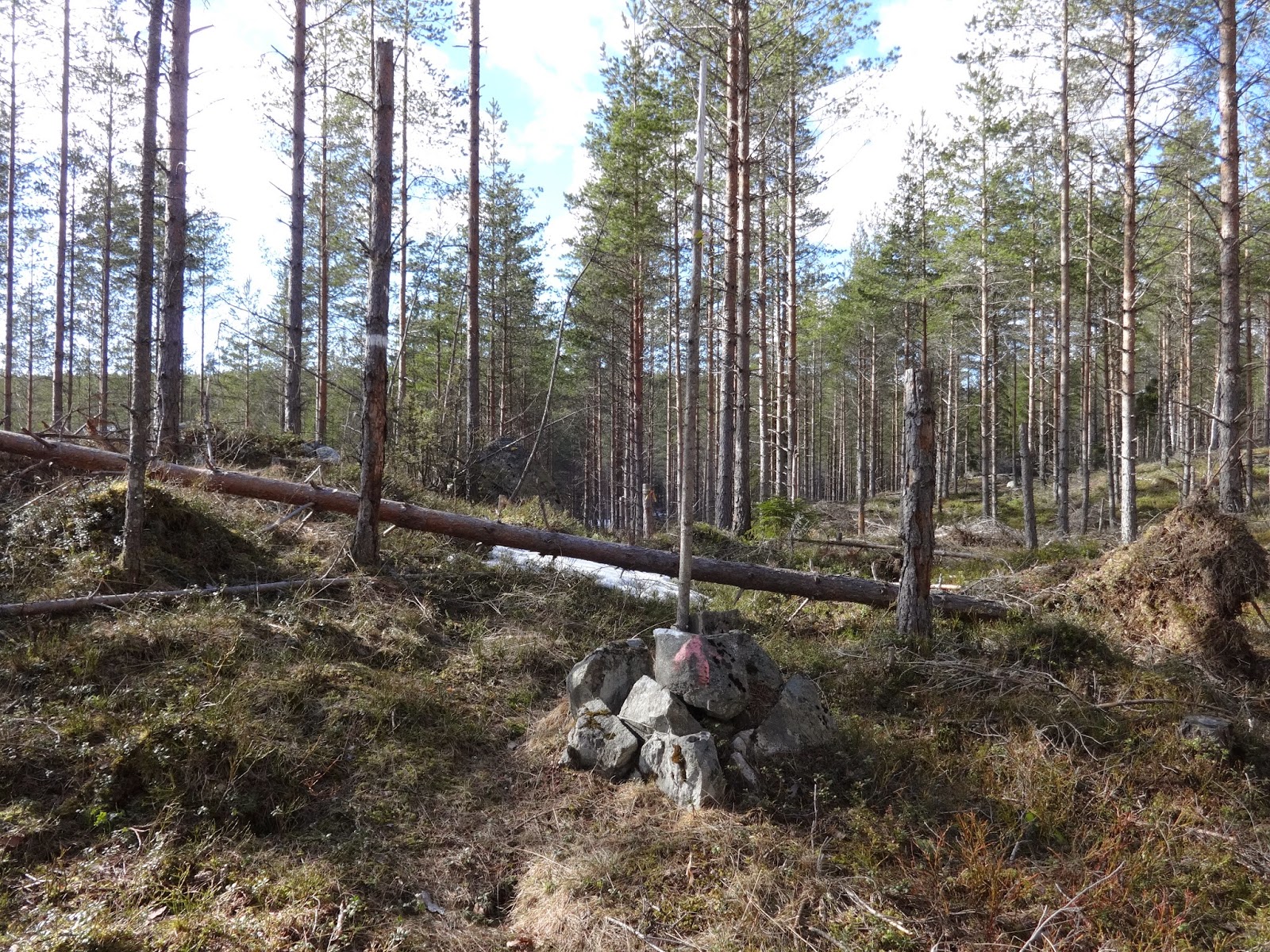 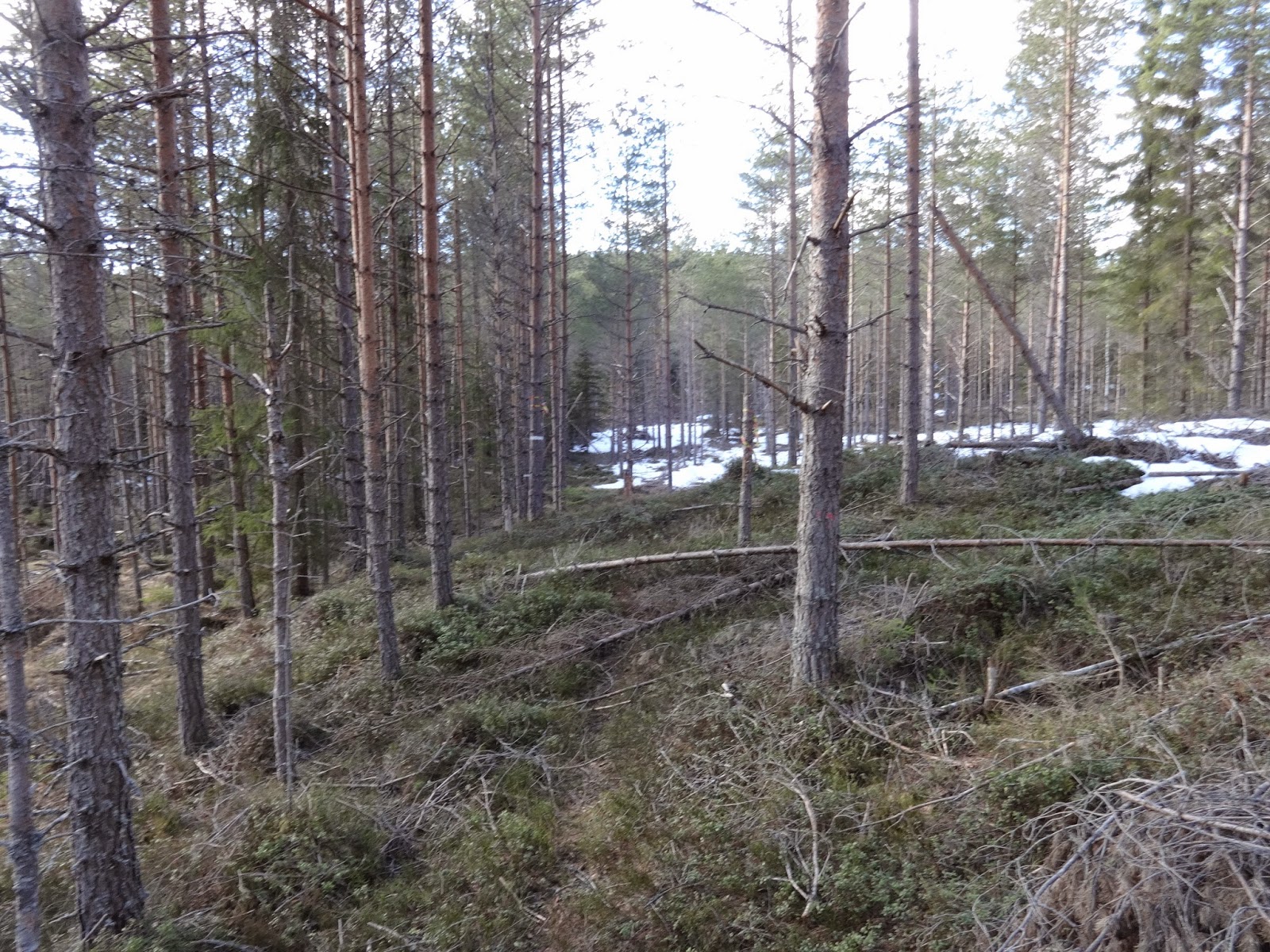 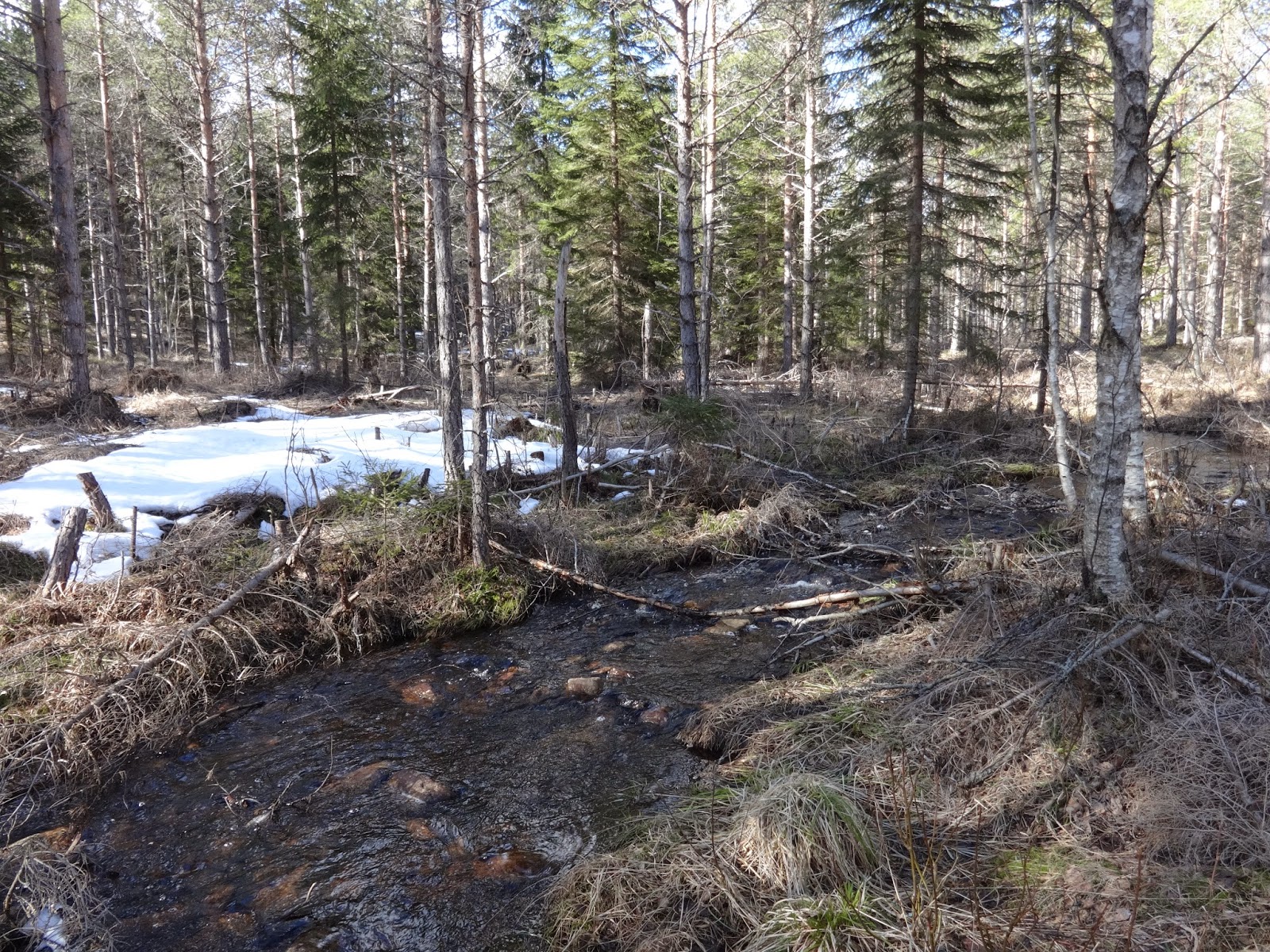 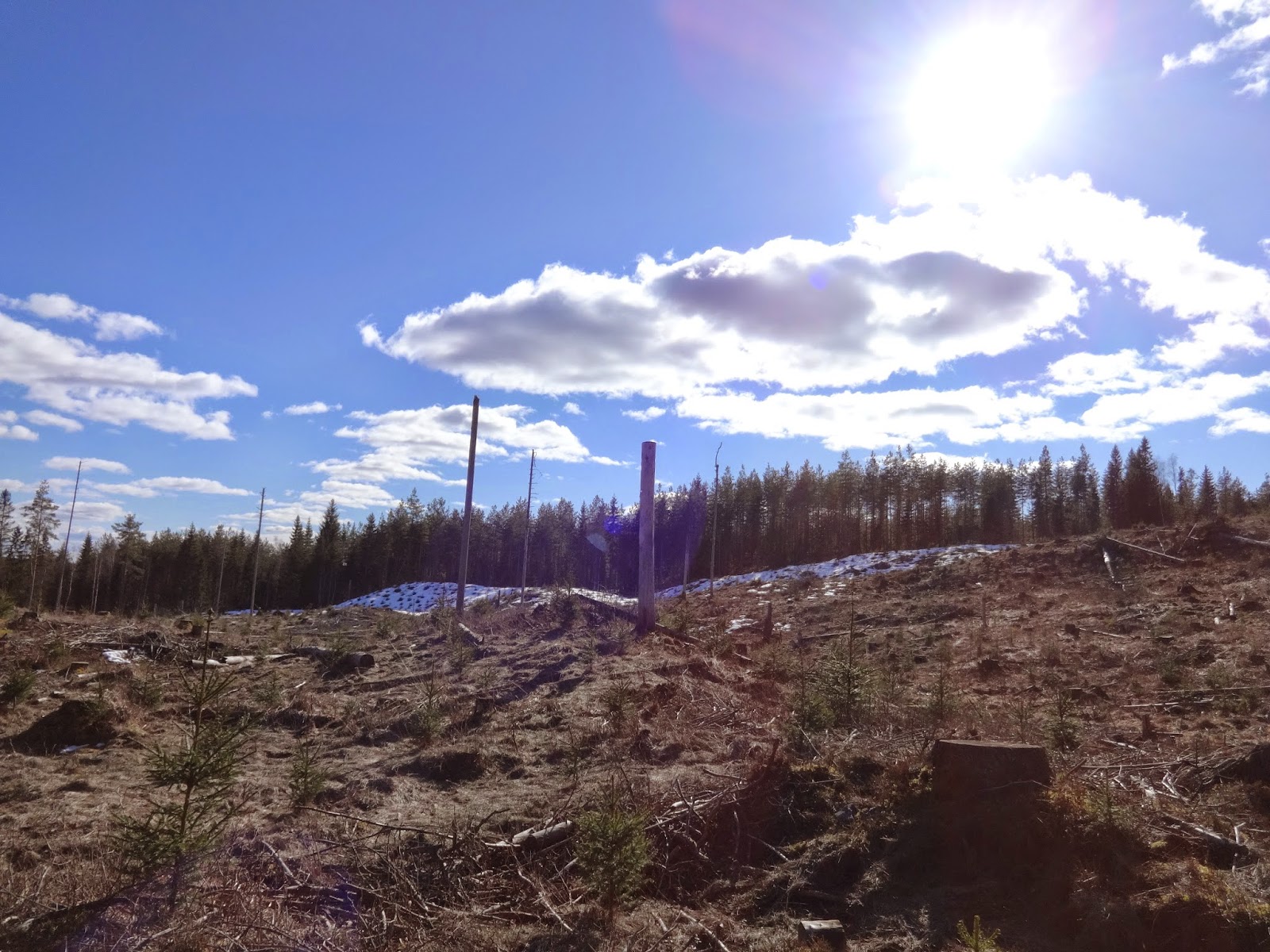 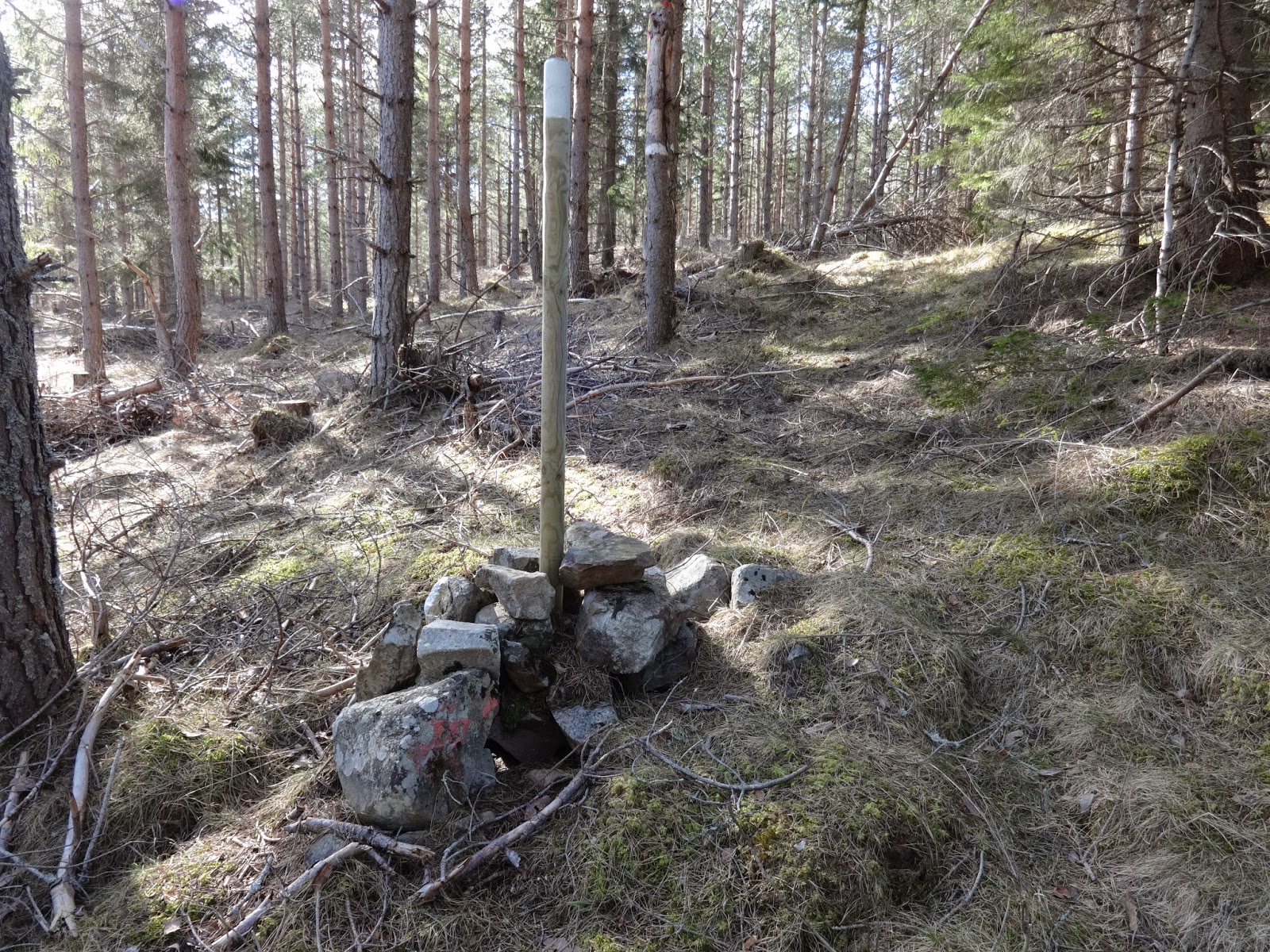 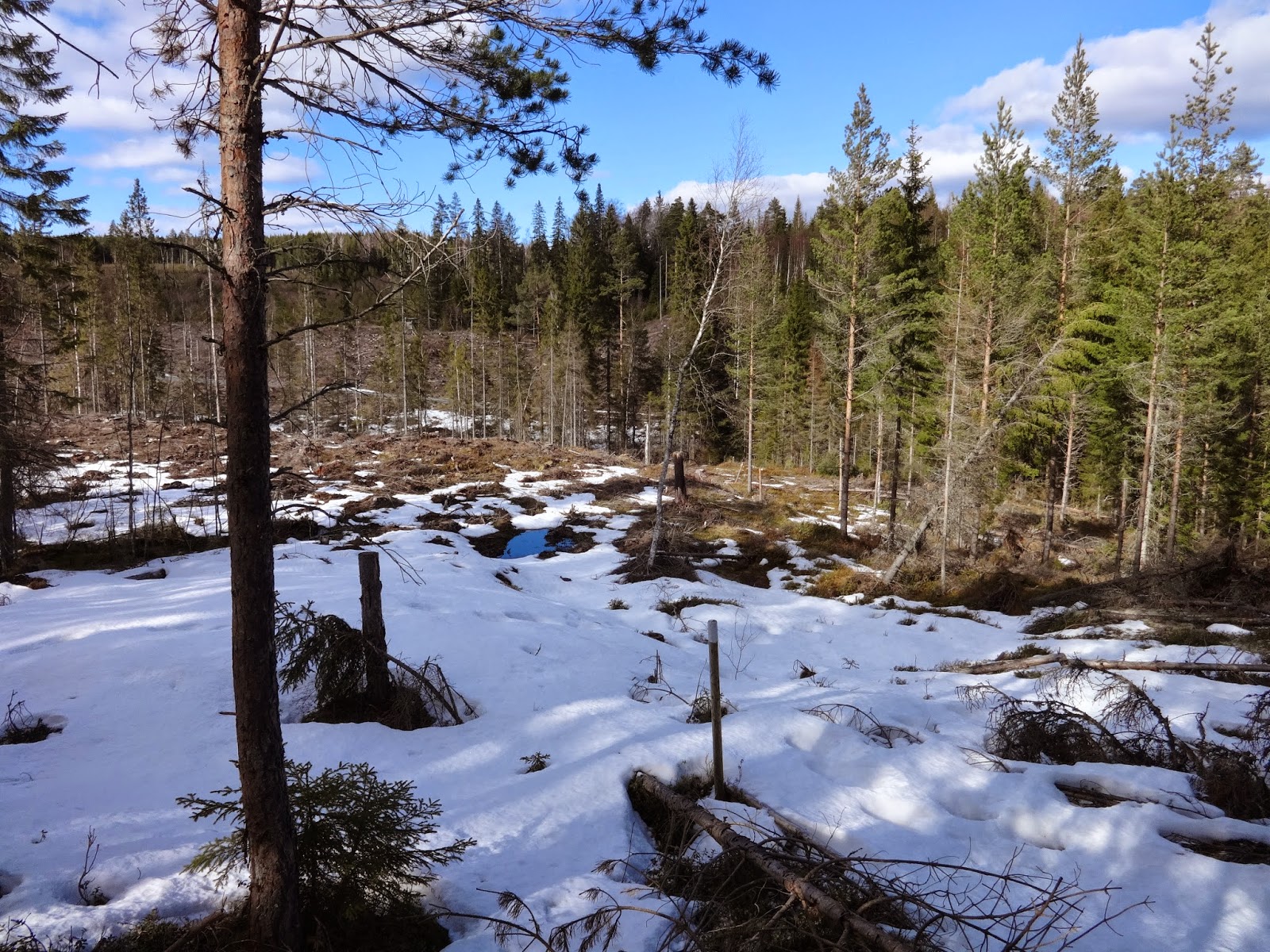 It took me about an hour to hike roughly 1km through the above stretch of woods.  Granted, I took some pictures, and took a short break after hiking up a big hill, but this is still a pretty slow pace.  And as I said before, I had a train to catch so that I could get back home for Easter Sunday dinner as I had promised my family.  When I got to the lumbar road down the hill, and saw no clear markings on the road or in the next stretch of woods, I turned right back around on the gravel road and hiked back to the highway.  On the highway I hiked for a few hours, thumb out as cars passed, before a very nice guy picked me up and was kind enough to drive me to a train station so that I could catch my train. 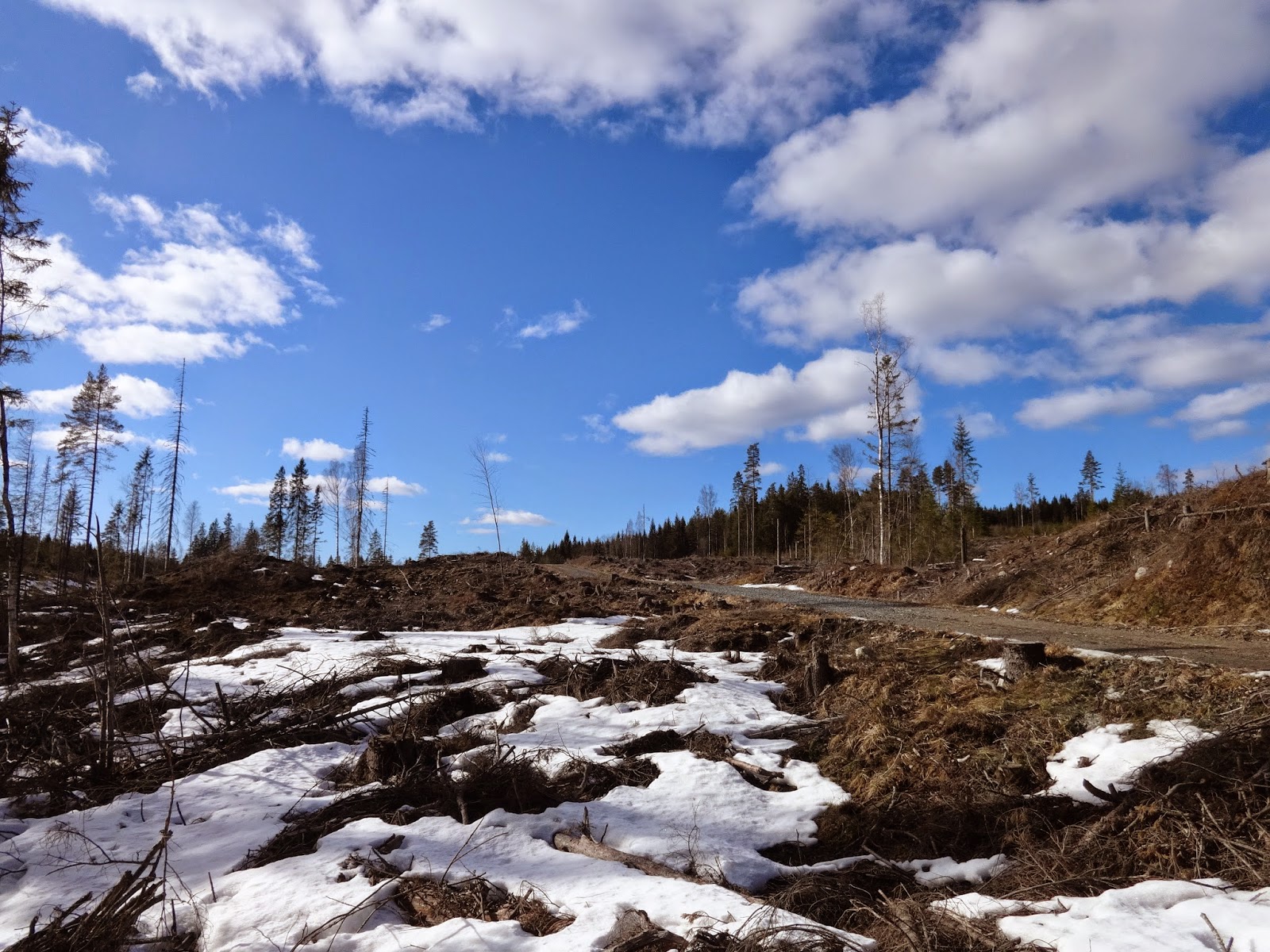 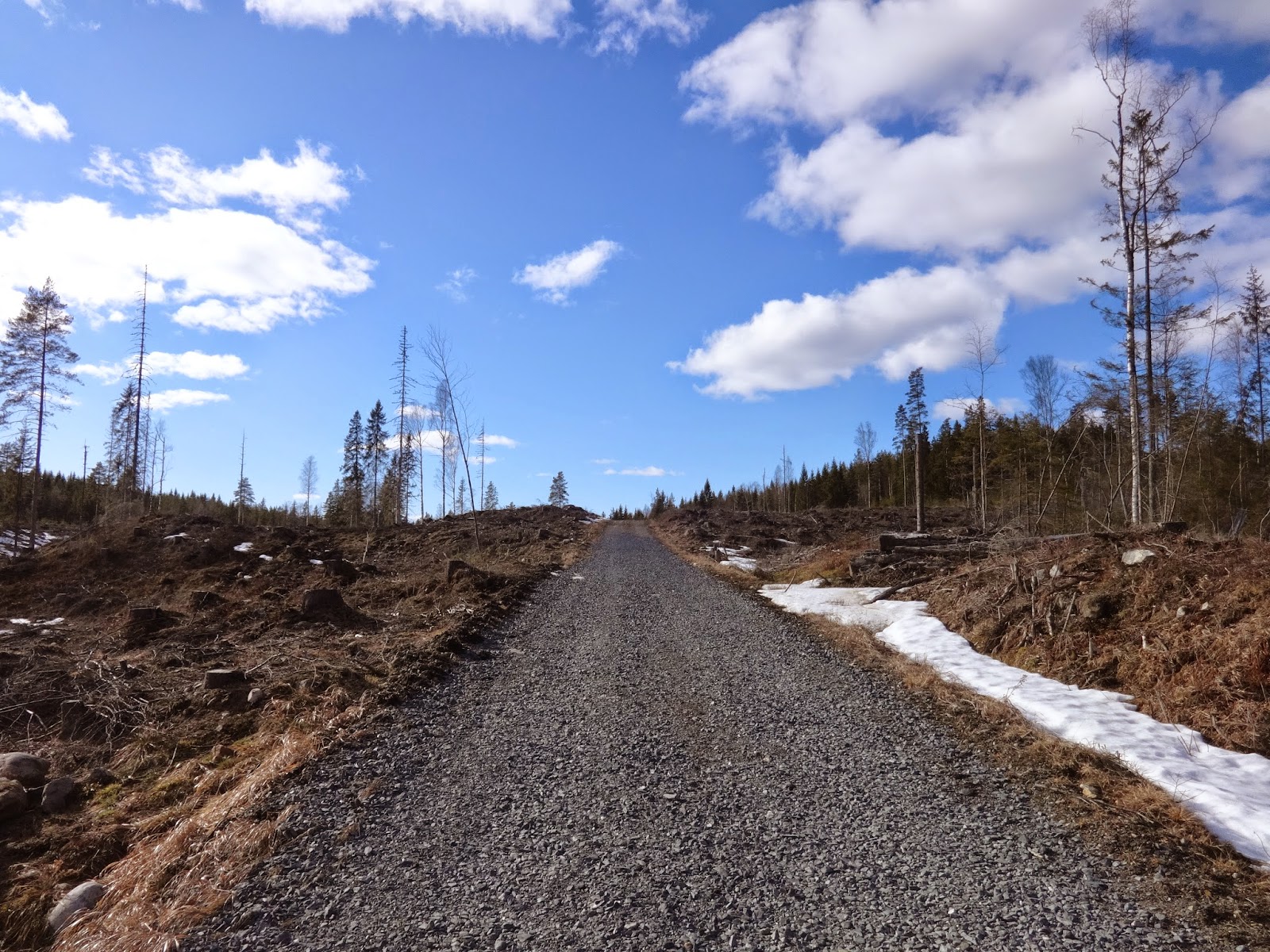 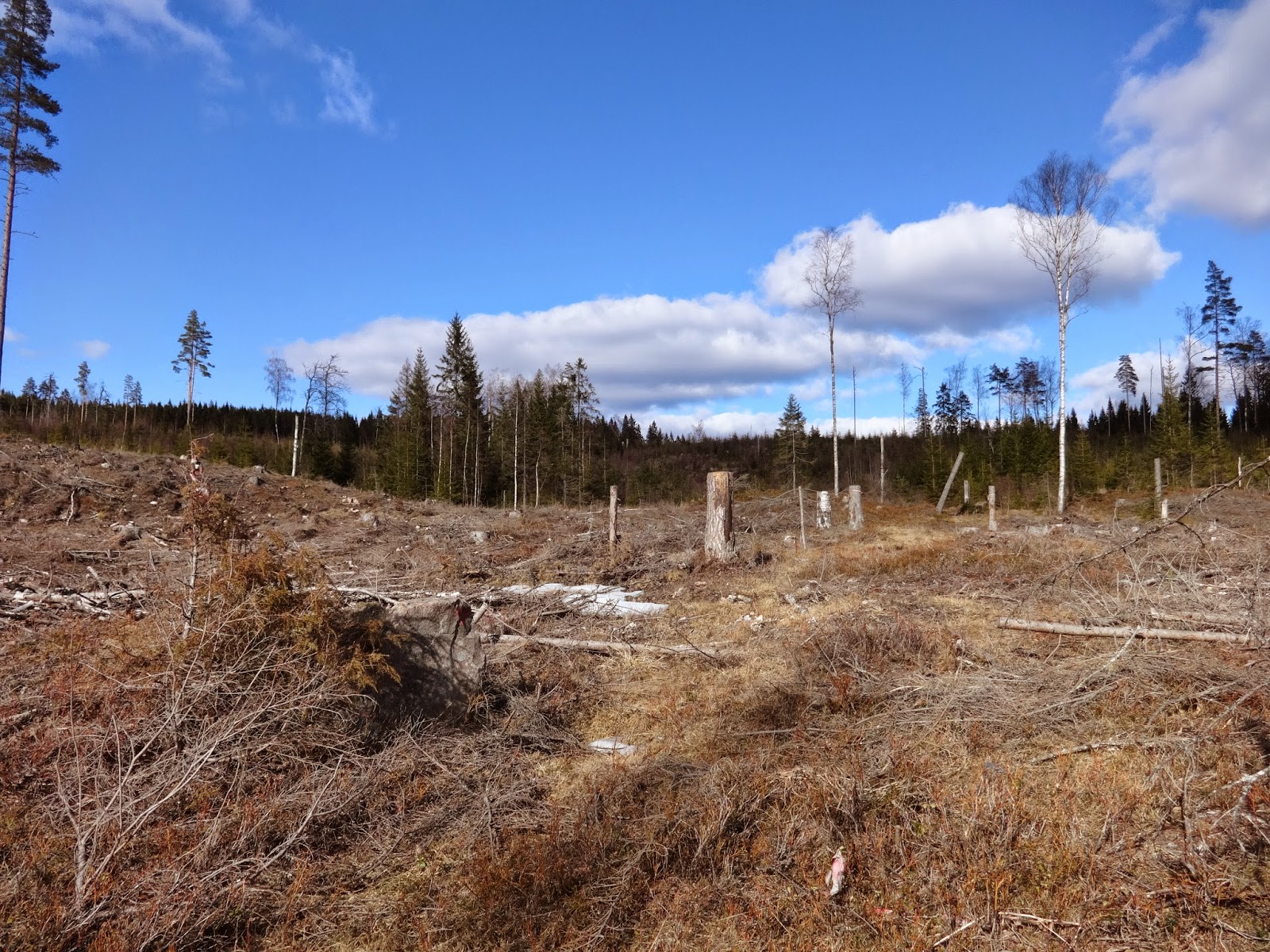 Such is life as a section hiker with a family.  If I would have had more time, I would have gladly explored this neglected trail, but that was not the case unfortunately.  So keep this in mind if you plan on traveling through this bit of E1, though for experienced backpackers and any rare E1 thru-hikers, this should not present too much of an issue.  I do intend on sending a few *emails to people that can perhaps help to fix up this trail shortly after publishing this report, and will give any updates that I can in the future.

I will have to be ready to be flexible and improvise for my next big section hike on the E1 from Smedjebacken.

For the record, shortly after publishing this trip report (on April 9th) I did in fact email two people that have some kind of responsibility for information regarding this trail.  I found one email on the official E1 Sweden website, and one from the town of Smedjebacken's official website (which I linked to above).  I have yet to receive a reply from either of them.  If I do receive a reply or any updates on this trail, I will be sure to update this report.  Below is the email that I sent:


"Hello there!  My name is Cesar Valdez and I am writing a trail guide in English for the Swedish E1 trail system.  I recently attempted to hike from Björsjö to Smedjebacken, and found that the trail is not marked well or at all, and in the woods is pretty much abandoned.

You can read my report on this trail and see many pictures documenting the situation here: [link to this report].

Are there plans to fix this trail?  And is the trail that goes from Smedjebacken north, which continues the E1 trail, in the same condition?  I will be traveling to Smedjebacken in about a month to do another hike, and hope that the trail is in better condition going north of town than it is going south.  Also, are there any PDF maps of the Sméleden trail available?  I searched on Google and could not find any.  Or could you send me paper copies of maps perhaps?

Thank you for your time, and I look forward to your reply.  Please note that I intend on sharing any reply from you on my blog.

Have a nice day!"

I have since studied my map of the area north of Smedjebacken in detail, and I am strongly considering skipping ahead further north on the E1.  This is because from Smedjebacken going northbound, the trail almost entirely follows roads.  And as those of you that follow my blog will know, I am not really interested in walking on asphalt and/or gravel/dirt roads (though gravel/dirt roads are much preferred over asphalt).  I am interested in hiking in nature (i.e. the woods, mountains/hills, fields, etc.), be it on or off trail.  I even did a Google Maps street view of some of the roads the trail follows, and it's a lot of asphalt, farms, and not much of interest.  More on skipping ahead in the next E1 trail guide.
Posted by Cesar at 11:12 AM