This post covers Stage 12, Glimmingen-Vassbovik, of the official guide to the trail.

You can also check out my report on the section before this one (going southbound), Stage 13.
If you have not already read the introduction to this trail guide, you can check it out by clicking here.  It has a list of reports on other sections I have hiked plus other important/useful background information in general--so please read the introduction first before reading my reports.


*  I have mixed emotions about Stage 12, but overall it is a worthwhile and at many points a great hike.  There were a few things that bothered me about this section, which I will elaborate on below.  I had company on a two day section hike of the trail in July, my friend Mehrdad, who also acts as both model and cameraman at times.

As I wrote about on the previous report, the beginning of this trail going southbound is a great starting point for section hikers like myself; or if you are a thru-hiker a great chance to take a break from the trail to resupply, rent a hotel/BB, buy a nice non-backpacker meal, etc.  Glimmingen has its own bus stop, and we were able to easily catch a bus from the city of Uddevalla, and it only took us 10 minutes or so.  There is some road hiking for a bit, and then some dirt road hiking. 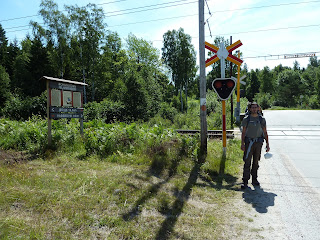 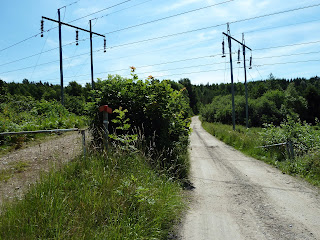 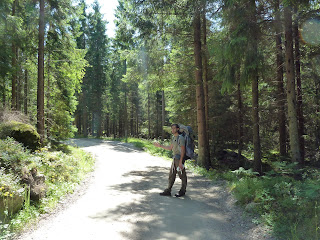 You will pass a motocross track, and there are also some signs and markers around the track where dirt bikes also ride on.  This is problematic for several reasons.  For one, it is dangerous to have both hikers and motorcycles on the same path.  Next, the different trail markers make things confusing, as we found paths once we finally got into the woods that were marked orange--just like the orange of Bohusleden.  We actually ended up getting lost because of following the wrong orange-marked trail, and this was also due to a poorly marked part of the hiking trail, as you can see below: 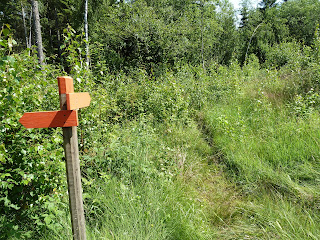 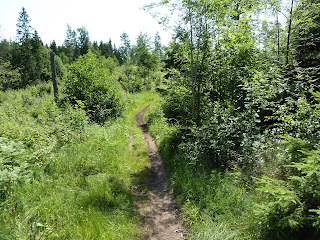 In the first picture above with the trail marker, it points most directly towards some tall grass and a faint trail.  This is where we went off trail, and to make matters worse, we found trees with orange spots soon after that we thought was the right way.  This wasted roughly a solid hour of our time as we hiked in circles, backtracked, grumbled, and finally got back to the dirt road where we could get back on track.

In the second picture above, is the actual trail you take to continue, but it is partially obscured by plants and not well marked or maintained at all.  And on top of all this, as we finally found our way, we heard the unmistakable sound of dirt bikes headed our way on the trail.  We stepped off the trail as they came flying by, and looked at us with the same annoyance and slight bit of surprise as we looked at them.

I don't know who thought putting a hiking trail next to a place to race motorcycles would be a good idea, or if the trail was there first and no one thought to move the trail over to avoid problems, but my advice to any prospective hikers is to just avoid this part of the stage completely.  Check the map and look for other dirt roads to follow--there are two roads on each side of the motocross area, a more direct one to the west, or a longer one to the east, both of which intersect with the highway that the trail crosses (or rather, goes under, as you can see below). 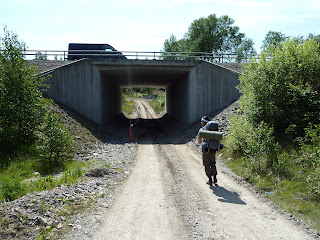 With all that behind you after going under the next highway, things improve quite a lot.  Some very pleasant trails are ahead, and I especially enjoyed the tunnel-like trails with big pines all around in a few spots.  Mehrdad and I were soon cheered up after a less than ideal start of a hike, even with having to deal with more bugs as the trail progressed (July is high time for bugs in the southern half of Sweden). 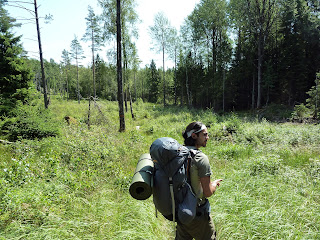 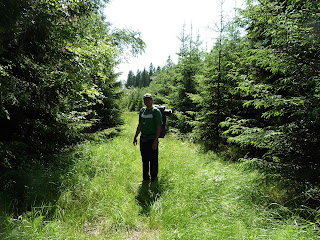 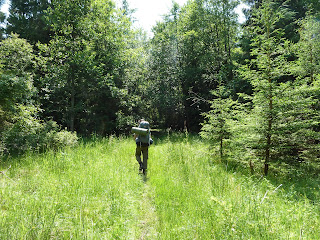 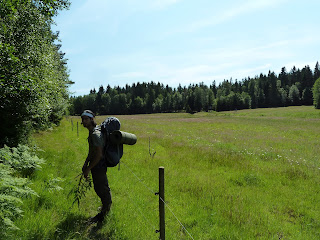 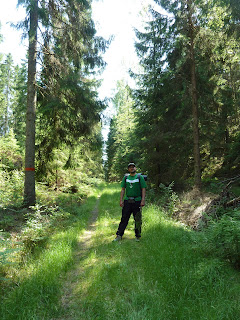 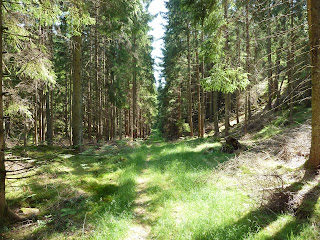 After a long woodsy walk, there is a large clearing to get through, and a few farms, until you end up passing a football field.  Next to the football field are some taps on a FC building where you can drink and refill bottles, and very close by is a small shelter right next to the trail.  The shelter also has its own tap, but since we had already had our fill, we didn't test it out.  In stark contrast to earlier on the trail, the next section is very well marked and maintained, and some hilly and scenic woods hiking follows. 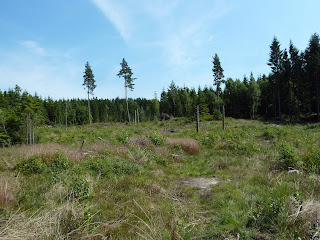 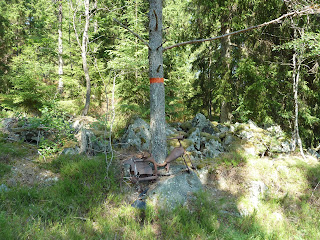 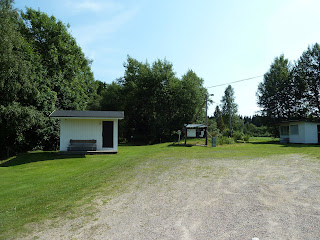 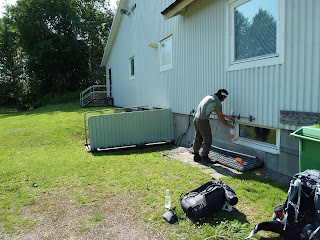 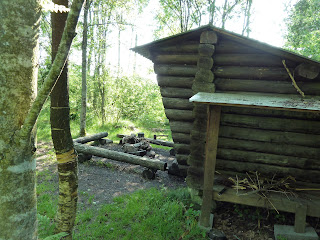 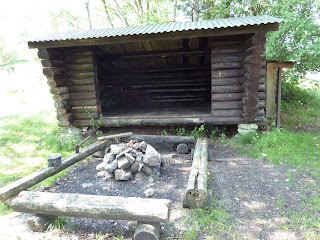 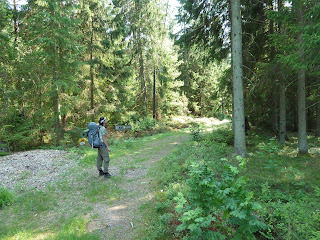 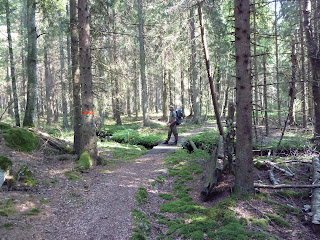 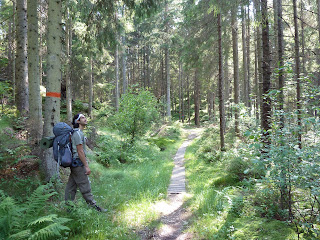 The woods path ends on a road, and soon after at the end of the stage is a field with a nice view of the lake Vassbosjön and the hills beyond.  At Vassbovik there is a bus stop, and the trail continues up the hill to the left at the fork in the paved road you briefly follow. 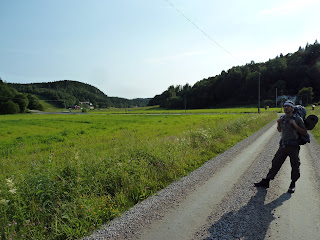 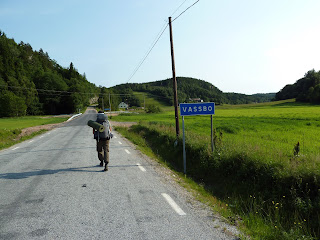 Including getting lost for a bit, it took us about six hours to complete this stage at a normal pace with plenty of water and snack breaks.  The next stage is a more challenging and longer one at 18km--but more rewarding and beautiful patch of trail, if you ask me.  One issue which people that depend on trail shelters more or exclusively will face is that the next stage only has one shelter on the trail itself.  If you use your tent/tarp/bivy more or always then this is not an issue and there are plenty of nice places to make camp, including seven different lakes (one of which is a pretty big one too) on the trail and several others not too far off trail as well.