This post covers Stage 19, Vaktarekullen-Lunden, of the official guide to the trail.

You can also check out my report on the section before this one (going southbound), Section 20.

If you have not already read the introduction to this trail guide, you can check it out by clicking here.  It has a list of reports on other sections I have hiked plus other important/useful background information in general--so please read the introduction first before reading my reports.

*  If the section before this (stage 20) was a trail of many bridges, this section is a trail of many planks--some good, some bad, and some that are somewhat dangerous, as I will explain more about shortly.  This is also another stage that pretty much guarantees you will be hiking with wet or soaked shoes and feet, as water is once again a central feature.

In this stage rather than crossing rivers and lakes, it is mostly crossing marshes and streams.  There is a variety in the nature here that should surprise even veteran hikers, as I was pleasantly surprised by some of the beautiful wetland landscape that is a contrast to the hills and cliffs of other sections.  There are also some unique landmarks on the trail that, in addition to the natural beauty, make for quite a memorable hike.

As promised in my last report, a more in depth look at the amazing Vaktarekullen cabin shelter will be given, which is the starting point as well: 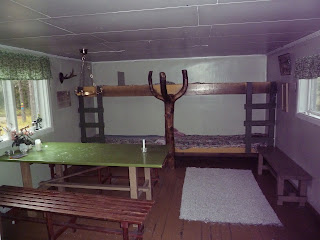 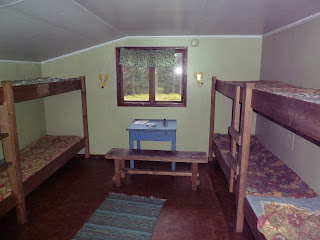 Pictured are the two rooms of the cabin, which as you can see have many (12 total) beds as well as plenty of places to sit around.  Not pictured is the big wood stove, which would be off frame to the left of the first picture above.  I thought about starting a fire, but as I was just stopping for lunch, decided to just light up some candles instead.  Also not pictured is a mini-kitchen complete with dishes and utensils and such.  Very cozy all the way around.

As I mentioned in the last report, there is a sign in Swedish, English, and German asking travelers to only stay one night.  How they plan on enforcing that rule remains unclear.  While I was there for about an hour or so, I was alone, and it looked like no one had been there recently.  There is also a fancy outhouse nearby, as well as a shed for firewood.  Had I known that this shelter was so cozy and luxurious (for a backpacker), I would have planned on staying there--but then again the other shelters in the area are also pretty nice too.  I certainly plan on re-visiting the cabin to stay the night in the future, even if only for an overnight trip.

*** EDIT 18/11/12: In mid November I did in fact return to this cabin for a wonderful overnight stay with my family, and it was excellent.  We were the only ones there that night.

There were light snow flurries outside when we arrived at dusk, temps around 2C, but soon after settling in and getting the wood stove going inside was 18C (there is a thermometer inside).  In the morning it rained, so we just collected water from a big puddle in some moss outside, but later on we were able to find a small well about 100-150m east of the cabin on the blue marked trail.

The beds were firm but comfortable enough, better than a lot of motels I have slept at, but not like most regular beds.  We tried to cook on the wood stove, but it is pretty big, and only served to keep food very warm when we put our pot on top of it.  To boil water you would have to get a pretty big fire going in the stove, so we just opted to boil water on our alcohol stove and use the stove as the world's best cozy.  Above the stove is also a very convenient drying rack where I was able to dry my shoes and socks on from the hike.

This is easily the best backpacking and/or camping shelter (i.e. no running water or electricity and way out in nature) I have ever stayed at, and you can't beat the price: Free!  This seems like a bit of a hidden gem, so please, if you do go here--let's keep it that way.  My family and I made sure to clean it up nicer than when we arrived, took all our trash with us, and even donated a roll of toilet paper to the supplies.  We all look forward to going back :)  ***

Leaving the cabin, there is some really great trail as you hike down the mountain: 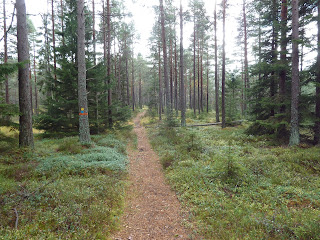 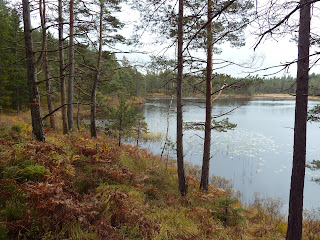 You will start crossing the first of many wooden planks that help (or used to help) navigate across the wetlands.  Be cautious while on these planks; some of them are slippery, wobbley, damaged, or all of the above.  Some are partially or full submerged in water.  Obviously I didn't have the time nor would not have had space on my camera to document all of the planks and their issues, but just know that when you see wooden planks coming up, to be careful, and that they may or may not keep you from walking ankle or even knee deep in marsh/bog.

Here are some of the planks early in the stage, as well as the first shelter you will encounter going south: 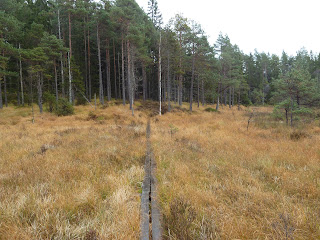 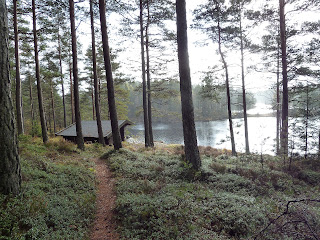 After going through more woodsy wetland past the shelter, pass a huge and lonely rock, and then exit the nature preserve, you will follow a gravel road for a while: 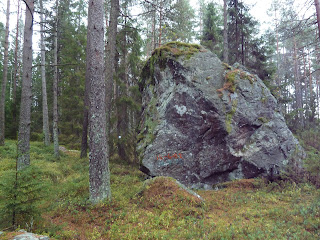 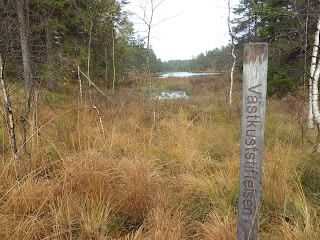 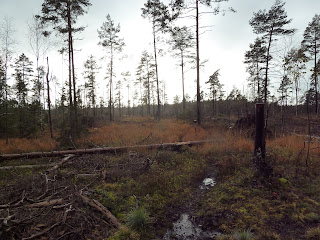 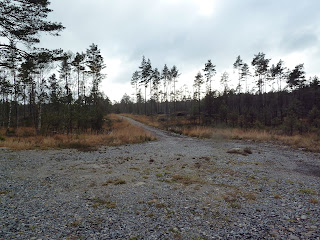 After following the road you will end up at roughly the halfway point of this stage (which is 15km total).  You follow a dirt road past a pretty little lake, and then back into the woodsy wetlands passing a few more pretty little lakes, as well as stunning fields of marsh plants: 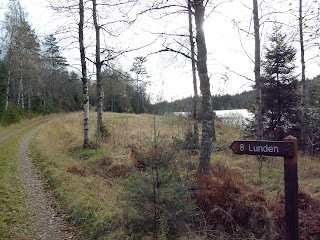 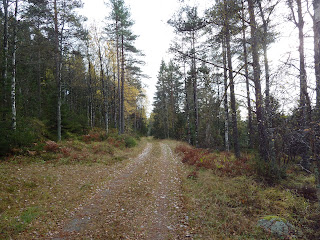 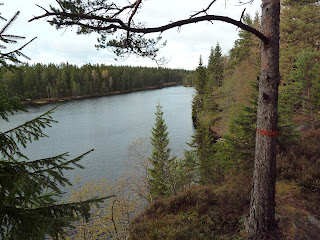 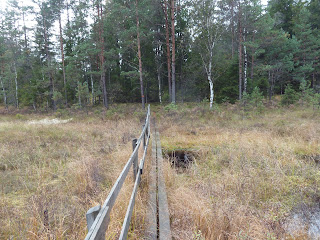 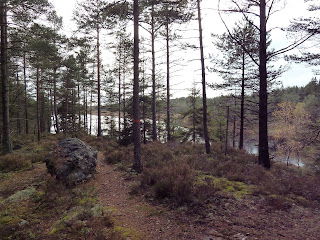 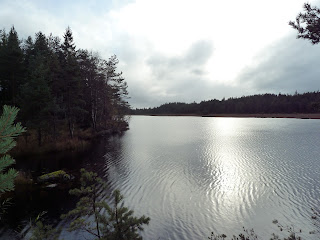 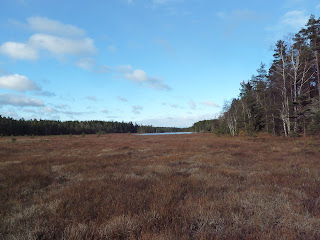 Here is an interesting bit of trail where you are walking on planks (these ones were alright) between two huge boulders: 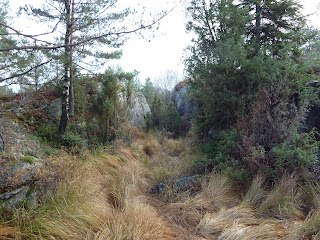 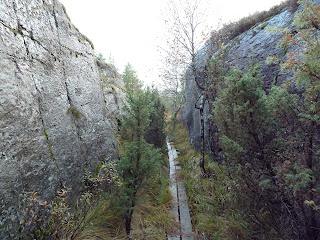 Arriving at the big lake Äntervattenet, there is yet another unique and interesting bit of trail to cross; a stream that feeds the lake passes under a series of large rocks that form what seems like a natural bridge, and it makes a soothing mini-waterfall kind of sound underneath you while you cross: 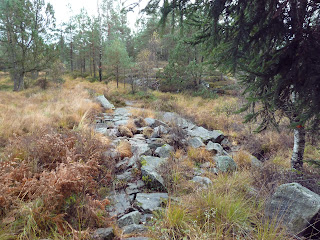 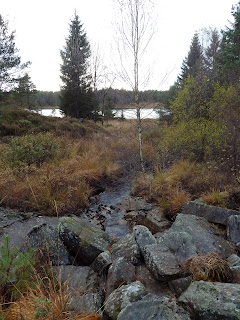 Another great little shelter with a lovely view, a common thing on Bohusleden, and this is where I spent the night: 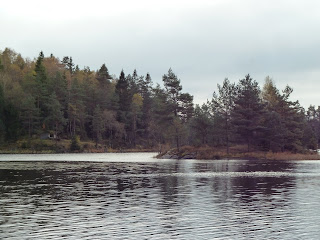 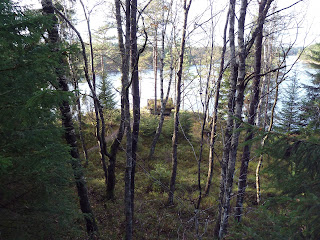 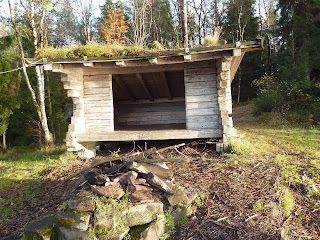 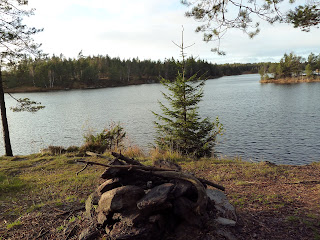 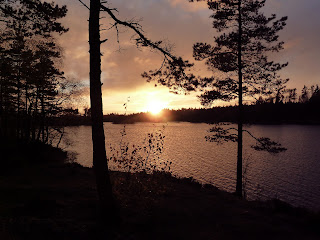 As I was finishing up dinner, I was surprised to hear footsteps, and another backpacker from Denmark heading northbound showed up and we shared the shelter.  He was the only hiker on the trail I ran into all weekend.  It rained all night, heavier than the night before, yet not a drop fell on us inside the shelter.

After much needed rest and a big breakfast, I wished the Dane well and marched on.  Past the lake you only briefly hike through the woods before getting to an old dirt road.  The old dirt road takes you to a gravel road, which will then take you to a rather anti-climactic endpoint: a fork in the gravel road surrounded by some farms (that I didn't bother to take any pictures of): 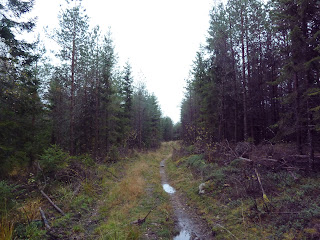 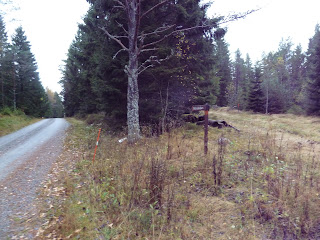 In total, not including the breaks for lunch and dinner/sleep of course, it took me about five hours to finish this stage.  The two stages 20 and 19 had taken longer that I had thought--I had initially planned on hiking the next shorter Stage 18 as well, but didn't have the time once I arrived at Lunden.  From the endpoint I hiked 4 or 5km to an actual paved road in the area, where a kindly old farmer was nice enough to pick me up as I hitchhiked in the rain.  I got a ride to the small town of Dingle where I was able to take a train back home.

Another amazing section hike comes to an end, and I am now officially over halfway through the entire Bohusleden.