This post covers Stage 23, Vassbotten-Nornäs, of the official guide to the trail.

You can also check out my report on the section before this one (going southbound), Stage 24.

If you have not already read the introduction to this trail guide, you can check it out by clicking here.  It has a list of reports on other sections I have hiked plus other important/useful background information in general--so please read the introduction first before reading my reports.

Update 17/04/2017: If you are interested in doing a loop that connects with Bohusleden at Nornäs that goes into two national parks and the small town of Ed (good for resupply), please check out my guide on The Ed Loop here.  I came up with the loop myself, and I think it's a great hike!

*  If you enjoy a challenging hike though terrain that is more raw and isolated, then this is the stage for you.  There are long parts of very swampy trail, and it is pretty certain that your feet will be soaked--there is even a good chance you will be ankle or shin deep in water/bog/mud. Of course with swampy terrain during certain parts of the year (i.e. summer), also comes bugs... lots of bugs.  Bugs of many different varieties, several of which will try (and often succeed) to bite and sting you; such as horseflies, mosquitoes, midges, flying ants, wasps, etc.  If you are there during bug season, break out the head net and/or bug spray/oil.

The rewards of going through this stage perhaps not everyone can appreciate or feel are worth it.  So if you don't like long walks through swampy and/or rough terrain, you might want to consider skipping this stage.  You can walk around using roads, or perhaps hitchhike--though be careful doing either for obvious reasons.

But if you are like me, that likes to take on a project head on, and does not like to skip much of the trail, you will soldier on.  And there are unique rewards to those that endure these kinds of hikes.  There are moments of eerie beauty in this stage that made it worth it for me.  For example, climbing to the top of a rocky cliff in the middle of the swamp overlooking a small, still lake.  It was a lonely, alien, oddly stunning view with water lilies and tufts of swamp cotton and silence that will stick with me forever.

Yet because I was tired and bug bitten and wet I didn't bother to take very many pictures deep in the long stretch of swamp.  I just wanted to get most of it over with, honestly.  But I did take pictures at the beginning and the end.  The stage begins dramatically: 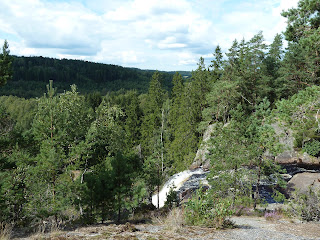 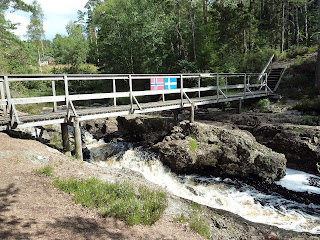 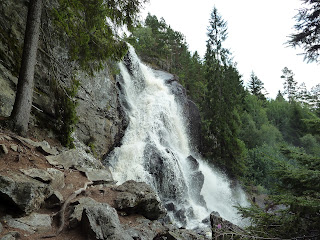 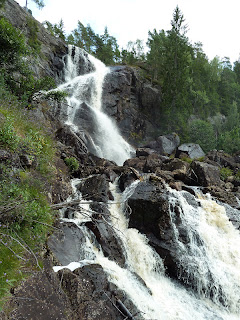 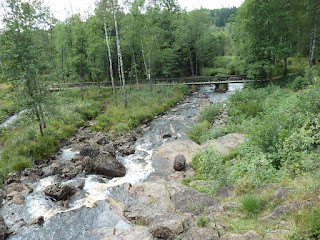 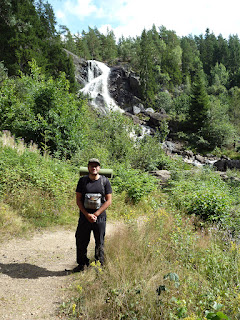 There are two ways to hike to Älgafallet waterfall from Vassbotten.  You can either follow the highway that goes north into Norway that also runs right next to the campground/shelter area in the village, or you can go east across a bridge on the Swedish side.  The Norwegian side will take you to the bottom of the waterfall, and the Swedish side will take you to the top of the water fall.

I decided to take the Swedish side to the waterfall because I wanted to backtrack just a bit to climb down and then back up again, allowing me to experience the waterfall twice--once hiking down and once hiking back up again.  I was very happy with my choice! The trail goes pretty much right next to the water fall on the western slope of the cliff on the Norwegian side, and the bridge over the top of the falls is the border to Sweden.  No issues with border police either ;)

After a nice but short hike through some woods, you slowly sink deeper and deeper into the more challenging part of this section I mentioned earlier, which accounts for most of the hiking you will do on this 14km length of trail. In addition the warnings I gave before, I should also mention that this is another part of the trail that is not marked very well at times.  I hiked off trail a handful of times because I missed the trail markers, and had to hike back to the last trail marker to search for the next one.

I did take a few pictures of some ruins in the middle of the swamp on a small patch of woods that was next to the trail. This ruin is not mentioned on the official guide, though there was a sign up with some history of the ruins.  Further to the north east from these ruins are another set of ruins marked on the official guide. 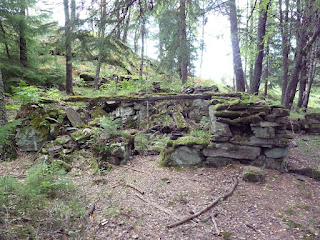 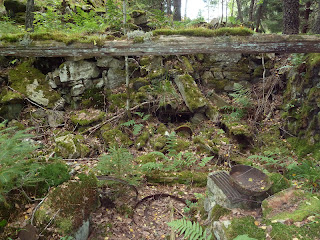 With soggy feet and probably a few extra bug bites, you will eventually get back into some solid ground and scenic woods as you get close to the large lake N. Kornsjön.  I actually remember taking this next picture thinking, "Phew!  Feels good to be back in the woods again!" 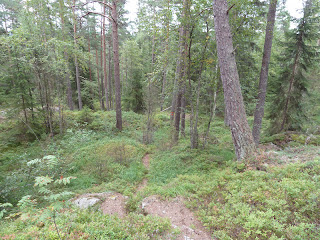 Once you get to the big lake, you will eventually come to a gravel road that follows along the south west side of the lake until the lake ends.

Now technically this is the end of the stage according to the official trail guide.  There is not any big landmark that I could make out, just the end of the lake.  This entire section of trail took me about five hours to hike, but I should note that during the bulk of harsher/swampy parts (which accounts for most of the stage) I was moving at a fairly fast pace with few breaks in order to march on to more pleasant trails ahead.

There are vast amounts of water to chose from for drinking/bathing--and at least the isolation makes the water quite clean and untarnished--passing at least five lakes close to the trail by my count, so no need to worry about water in the slightest.

What is not on the official guide, on this stage or the next one (Stage 22), and is important to mention (especially after such a hard hike if you are coming from Vassbotten) is that very shortly after you pass N. Kornsjön (pictured above) you will hike next to Mellan Kornsjön, and there on the northern tip of this next lake is a pretty nice shelter.  Again, this shelter is not marked on either Stage 23 or Stake 22 maps.

I would have taken pictures of it, but there were two friendly Dutch girls camped out there, and they had a bunch of laundry drying around the shelter.  I thought it might be weird if I took pictures of the shelter with two strangers' bras and panties hanging out to dry.  After talking for a bit and drinking a cup of tea (thanks Dutch girls!) I decided to continue hiking to the next shelter on following stage: