A Long Introduction to Cesar and The Woods

As far as backpacking/camping goes, I was fortunate to have been born into a set of circumstances that has greatly facilitated my passion for the outdoors.  My father was in the US Army, is the veteran of two wars, and the survival training he taught was a big influence on me.  My mother was a nurse, and the same can be said of the valuable training she taught me.  Both of my parents are immigrants from Latin America to the USA, and this perspective was also very valuable, as it is one that has an emphasis on being frugal and self-sufficient.  In addition to the vast amounts of information made available to me through my parents, I was also given ample opportunity to put what I was taught to use.  As a military family, we moved a lot, and in my youth I often found myself in a new town.  Luckily these towns had plenty of woods for me to take advantage of, for example military bases in Germany when I was in grade school, and a boring little town in central Pennsylvania when I was in high school.
The boring little town was both a blessing and a curse.  A curse, because as a teenager in a rural landscape of only 17,000 inhabitants, there is little to do and little that caters to your desires of excitement and adventure.  It was a blessing because this situation challenged me to create my own things to do, and to seek out my own excitement and adventure.  Stomping around the woods with an old blanket and a can of beans was very fun at times, but many times difficult and uncomfortable, and the more challenges I faced, the quicker I learned that I lacked the skills and equipment to fully deal with what nature threw at me.  Today I could have taken advantage of the wealth of resources available online, but I didn’t have that option then.  This was in the mid 90’s, keep in mind, when the internet was laughable compared with today’s standards.
Stuck in a small town, a fledgling internet, a tiny and dated public library, and no experts or masters on the subject (most people I knew that went backpacking or camping viewed it more as a passive, once-or-twice-a-year thing), I learned throughout high school and college mostly by experimentation, trial and error, and falling back on the tried and true methods I had learned as a child from my parents.  I also began to expand my camping and nature library at home, reading many books on the subject or related to it when I could get my hands on them.  After countless overnight and weekend adventures, I finally felt ready to take on bigger and better challenges by the time I was around 19-20 years old.  I began to go on extended trips--from one night to one week--on parts of the Appalachian Trail.  On the trail, I also got the chance to trade ideas with other nuts such as myself, and midway through college I felt I had really begin to bloom as a student of backpacking/the outdoors. 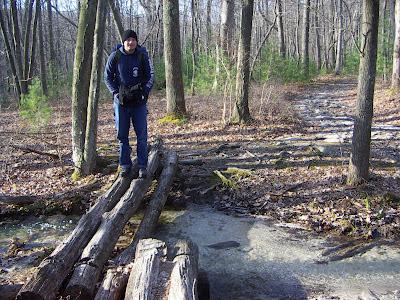